Serigrafia 76 reports a successful exhibition during EIMA 2014, where the company had many visitors to its booth to see its graphical solutions for agricultural equipment. 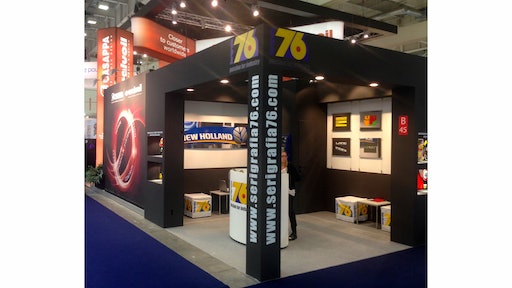 Serigrafia 76 looks back at Eima International 2014, where it was the only exhibitor from the screen printing industry. A few days after the end of the 41st international exhibition for agricultural machinery, the company from the Reggio Emilia area can consider itself amply satisfied, the exhibition in fact confirming its role as a benchmark company for all major European and worldwide manufacturers.

“During Eima International, we recorded a good turnout of visitors to our stand,” explains Fausto Mazzali, CEO of Serigrafia 76. “All of which showed great interest in Serigrafia 76 and its products. We are extremely satisfied and we can consider our objective accomplished: all the people we interacted with recognized the experience of our company in the sector that, in its 40 years of activity has been able to guarantee day to day excellence in its industrialized products that still maintain a hand crafted feel.”

Serigrafia 76 is now preparing for Agritechnica, an important exhibition for agricultural machinery that will take place in Hannover, Germany from November 8 to 14, 2015. This choice is in line with the company’s strategy that aims to expand in the agricultural sector, where 65% of its turnover comes from, with particular focus on the international marketplace: after having expanded to markets such as Great Britain, Germany, Austria, France, Belgium and Turkey. From 2013, it began an expansion towards India thanks to the Decal In project, a new productive and commercial unit tailored to the Indian market that will commence production in 2015.