Greenkote has more than doubled capacity at its production facility in Ohio in response to increasing demand for anti-corrosion and metal protection coatings. 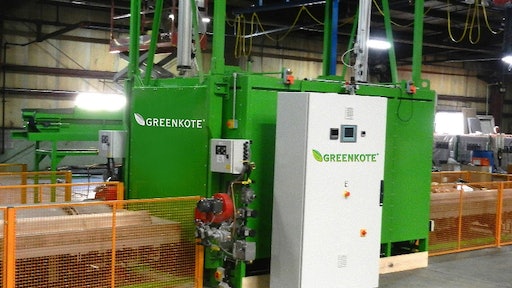 Greenkote, provider of advanced anti-corrosion metal coatings, announces that it has more than doubled the capacity at its headquarters production facility in Brook Park, OH. The company stated that the expansion has come in response to significantly increasing demand from the industry.

"Greenkote usage is showing a strong rise in the markets we serve," says Greenkote CEO Mark Gore. "Over the past year we've seen a steady increase in orders for anti-corrosion and metal protection coatings, and our new state-of-the-art coating line will help us keep pace with the need." The company stated that the added equipment will multiply current capacity by nearly two and a half times, enabling the Brook Park facility to process more than 150 tons of parts per month. It will also provide for the application of specialized topcoats and sealers to the Greenkote coatings to further enhance the coating performance.

Greenkote PLC provides coating services for construction, automotive, rail, utilities and a range of other industries in which products are exposed to weather or harsh and corrosive environments. Greenkote can be applied to a broad range of metal parts, from threaded fasteners to stamped and cast pieces, in sizes from 0.2-78 in.

"The advanced Greenkote coatings are replacing a number of older anti-corrosion processes such as galvanizing, hot-dip, sherardizing and metal flake," says Sean Smith, Greenkote's Manager of Engineering. "In addition to improved protection against corrosion, the newer Greenkote technology provides longer wear, better adhesion, and also more conformal coverage, which allows it to be used on complex geometries such as threaded parts. Plus, Greenkote eliminates the metal failure caused by hydrogen embrittlement, which is an intrinsic problem with many previous coatings."

The company pointed to eco-friendliness as another significant reason for the surge in Greenkote usage. Many older coating processes use acids, toxic chemicals and other pollutants that increasingly are being regulated around the world. By contrast, as the name implies, Greenkote is completely friendly to the environment and to humans. It is applied by a patented zinc-based dry thermal diffusion process that requires no hazardous chemicals and produces no toxic byproducts. Testifying to Greenkote's ecological friendliness, the company noted that the new coating systems installations at Brook Park required no approvals from the city or state.

ACME Quality Paints has added metallics to its line of Advanced Industrial Coatings which are suited for applications requiring good hiding and sag resistance.
Sherwin-Williams Automotive Finishes
July 1, 2015
Follow Us