Advancements in simulation software are making it easier for engineers to test and validate designs early on to ensure a more productive and cost-efficient design process. 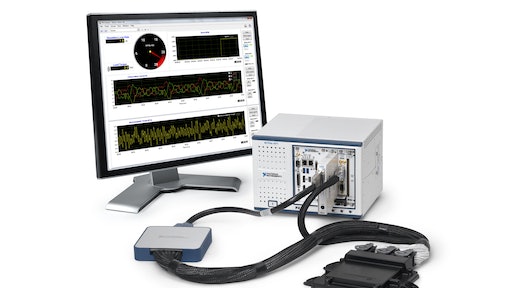 Computer-aided design tools have been in existence for several decades. While traditionally they were used to verify single designs, their capabilities and computing power have increased over the years to simulate and test several design iterations. “The trend in all engineering now is not just to verify the design, [but] to explore the whole design space,” says Richard LaRoche, Ph.D., Vice President of Engineering & Software Development at DEM Solutions (company information, 10958093). “[Engineers] want to be able to explore all the changes in an equipment design [and] all the different conditions a machine will deal with.”

The use of simulation software has become integral to a manufacturer’s design process. It provides them with the ability to test and validate numerous design options early on in the process to ensure the best possible one is chosen before reaching the physical prototype phase. LaRoche says a manufacturer can go through hundreds or thousands of design iterations virtually before ever building a prototype, which can provide significant cost and time savings. “It allows the equipment manufacturers to uncover issues with the design very early in the design phase when [they] can be fixed most effectively,” he says. “That’s a trend everywhere, to have more engineering up front.”

An important aspect of equipment design is understanding how a piece of equipment may be affected by materials it moves or transports. To determine this, LaRoche says often times engineers will create estimates of what the forces would be on the equipment, or else build a physical prototype to measure the actual load and its effects on the machine. While both are useful methods, he says they are not beneficial for testing multiple iterations of a design or the various motions and conditions a piece of equipment may encounter.

In order to make this process easier, DEM Solutions worked with its long-time partner ANSYS Inc. (company information, 10284948) to bring its discrete element modeling software known as EDEM into the ANSYS Workbench FEA tool (learn more, 12007264). EDEM models a variety of bulk materials—such as sand, sticky soil and boulders—to evaluate how they will interact with a piece of equipment and provides users with the realistic forces exerted on a machine.

The forces determined by EDEM are fed directly into ANSYS Workbench which allows engineers to conduct structural analysis and other evaluations of their designs based on the provided information. They can see how various movements or environmental conditions, as well as different types of bulk materials, will affect the overall design. If an issue is found, they can make a change to the design and immediately run more simulations to see how the new design will be affected.

Incorporating EDEM into the ANSYS software means engineers have a highly integrated solution to validate their designs, and they can do it as many times as necessary to ensure the best possible design. “[It’s] most valuable in the early design stages because you can go through all these scenarios and weed out the design options that aren’t going to work or aren’t optimal,” says LaRoche. “People want to explore all the different design options; that way [they] also uncover new, innovative designs that they wouldn’t have found otherwise.”

Additionally, LaRoche says it was vital to the integration of these two technologies that they be easy to use. He says while mechanical engineers need to be aware of how different materials will affect a design, they can’t afford to be experts in that field and need to be able to rely on tools that will provide them that information without hindering their work flow.

By doing all of the design exploration and testing virtually, companies can reduce the amount of prototypes they create, which can bring about significant cost savings. And often times once the prototype stage is reached, LaRoche says it is just to verify the design because the majority of the development work has already been done within the software, allowing manufacturers to produce their equipment faster.

With the increasing use of electronics systems in today’s vehicles, equipment designs have become more complicated which has led to the need for more software geared towards easing the development of these systems. Ben Black, Ph.D., Market Development Manager at National Instruments (NI, company information, 11151299), says the company introduced its new electric motor simulation toolkit because a reliable way to test control systems and motor drives for power electronic systems did not yet exist in the market. “There are some closed turn-key solutions out there, but there isn’t a true platform-based solution that is open and flexible and user customizable for this type of hardware-in-the-loop (HIL) test,” he says.

Advancements in field programmable gate array (FPGA) technology within the past few years is what made it possible for NI to bring this simulation technology to market. FPGA consists of an algorithm that is compiled and runs physically in a chip within a piece of hardware. “It’s incredibly fast, the math is very deterministic, and it gives us direct access between the processing of the simulation and the IO of the simulation because they’re all on the same chip,” Black explains. He says this is important because simulations of power electronics and electric motors, as well as the components around them, need to be completed orders of magnitude faster than traditional HIL simulations to accurately simulate the electronic system’s behavior.

The toolkit allows users to perform real-time simulations of their designs in a virtual environment, reducing the time and complexity of physical tests. Black says customers often test their prototype system to failure, which can be costly. Prototypes of large traction motors for heavy-duty applications can cost upwards of half of a million dollars or more; the engineers have one shot to get the test data they’re looking for and if they don’t get it then a large amount of money and time will have been wasted. With the toolkit, however, a model of the system can be tested to failure as many times as an engineer wants without having to spend time or money producing a physical prototype. “Being able to test more and more reliably in a virtual world before you do a physical test has a benefit of accelerating the development process for our customers,” says Black.

Designed in partnership with Spectracom Corp., the simulator consists of a dSPACE hardware-in-the-loop (HIL) Simulation System paired with a Spectracom Global Satellite Generator and Global Navigation Satellite Simulation. The GPS simulator is able to mimic the exact signals a GPS-enabled device receives from GPS satellites at any user-defined location and time, and can be combined with additional information such as vehicle speed to dynamically produce exact GPS signals.

“Technology in the automotive and commercial vehicle industries is leapfrogging with advanced driver assistance systems (ADAS), leading to fully autonomous vehicles in the near future,” says Warra. These advancements have been made possible due to technology such as GPS, radar and cameras providing computerized situation awareness for vehicles. However, testing of these systems has often been difficult. Though GPS is a key technology for determining the location of a vehicle, Warra says the inability to dynamically simulate its signal has required it to be tested using real satellite signals in vehicles on the road which can be costly and unsafe, especially during the development stages of a system.

With the GPS simulator, users can test their algorithms and overall system reaction in a laboratory environment before hitting the test track. “This gives the customer confidence in their development work before going to the field,” says Warra. “It also cuts testing times and costs significantly.” Testing in the lab makes it possible to define other test conditions, as well, such as loss of tracking and degradation of signals to ensure the quality and robustness of a design. “Engineers can define their test driving maneuvers once in this environment, and all the test signals are simulated cohesively without requiring any additional efforts for synchronizing various signal sources,” Warra says.

The simulator also allows engineers to test scenarios they would not otherwise be able to in the real world. For example, they wouldn’t be able to reduce the transmitting power of one or more global GPS satellites. Additionally, Warra says weather, drivers and driving conditions vary too much in the real world which hinders the development of GPS signal algorithms. “Precise repeatability of test conditions is almost impossible in real-world conditions and that makes an engineer’s job really difficult to debug and verify system behavior,” he says. With the GPS simulator, however, engineers can enter the parameters they want and run numerous simulations to get the information they need.

While prototypes and real-world testing are still a vital part of the design process, simulation software is making it easier for manufacturers to reach those final stages faster and in a more cost-efficient manner. It also enables them to create better quality products because they can easily test a variety of movements or environmental conditions a product may experience, leading to more robustly designed equipment. “It’s a bit of an arms race,” says LaRoche. “Once people start to innovate this way, everybody has to do it.”

dSPACE has been awarded a contract from the U.S. Dept. of Transportation and the National Highway Traffic Safety Administration to provide its GPS simulator system for the development and testing of intelligent driving and traffic systems.

Designers can now use existing non- or Classic AUTOSAR models for Adaptive AUTOSAR with TargetLink 5.0 and later.
dSPACE
May 12, 2020
Follow Us