New developments in design software aim to reduce the complexity and time required during the design process. 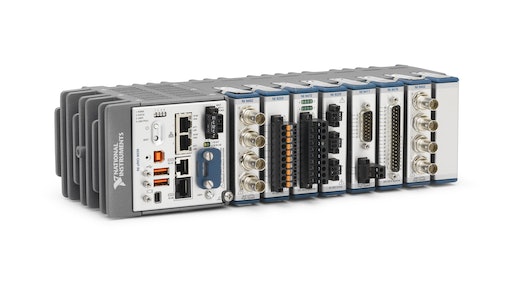 The engineering community is continually striving to find the right balance between developing a quality product or system, and doing so in a quick and efficient manner. Because of the ever-increasing time constraints they have to deal with, engineering hardware and software companies are regularly looking to develop new products and features aimed at helping engineers complete their work in a more efficient manner.

In August, National Instruments (NI) released the latest edition of its system design software, LabVIEW 2015, which features updates designed to help users complete common tasks in less time than in previous versions. “With the increased pressures on time to market, lower cost and product quality, being more efficient and getting your job done faster and at higher quality is paramount,” says Jeff Phillips, NI Section Manager – Platform Software.

He says these improvements came about by looking at how to simplify the execution of various operations within the software environment. “Productivity within the LabVIEW product often boils down to the number of mouse clicks and keyboard strokes,” he explains. “We solved this challenge with a host of new right-click shortcuts that simplify common actions like dropping objects on the diagram, configuring size and shape, and even debugging.”

With these improvements, engineers get the benefit of faster build times, execution and debugging speeds, which Phillips says translates directly to faster time to market, cost of test and higher product quality. Additionally, he says the new shortcuts ensure LabVIEW users are building their systems efficiently by accessing shortcuts and environment options that turn their engineering code into a system that solves their business challenges.

As part of its efforts to reduce design and development time for engineers, Dr. Klaus Lamberg, Lead Product Manager - Prototyping and Validation Software Tools at dSPACE GmbH, says the company has been focusing on improving engineering data management and providing better support of multi-user projects and multi-tool environments. “Model management supports customers in managing their increasing amount of simulation models,” he explains.

The company provides this capability with its SYNECT engineering data management system. With this software, models from different sources can be integrated, downloaded and simulated on various platforms, such as hardware-in-the-loop test systems. “The test management feature of SYNECT allows users to manage the immense amount of test cases and test scripts, interconnect them with requirements for maximized traceability, and organize the execution of hundreds or thousands of tests overnight and over the weekend, and collect and organize test results, such as passed/failed verdicts,” Lamberg says.

dSPACE’s recently released AutomationDesk 5.0 test automation software also aims to reduce engineers’ development time by improving how ECU testing is performed. Among the new features are signal-based tests whose plotter-like editor lets users intuitively describe stimulus signals and reference signals for simulation variables. Lamberg says this new type of test description is as easy to create as if it were on a sheet of paper. The resulting test documentation provides a report with vivid plots and parameter information for easy analysis.

Phillips notes that field-programmable gate array (FPGA) technology has become a common part of physical designs because of increased requirements for speed, reliability and security while reducing latency and design times. “The challenge is that programming FPGAs is quite hard, and there is only a finite amount of experts who can program FPGAs in traditional languages,” he says.

However, he says NI’s LabVIEW 2015 can make the programming of FPGAs easier due to the graphical and parallel programming approach built into the software which allows users to directly code FPGAs. The layout and design of code within LabVIEW maps to the layout and design of the FPGA, he explains, and works in tandem with the software’s open hardware integration and other features to help reduce cycle times and speed up time to market.

As the Industrial Internet of Things (IIoT) has become increasingly more prevalent, it has brought about new challenges for engineers. “One of the key challenges that system designers face is piecing together components from multiple vendors to embed intelligence into their ‘things’ (which could be machines, automobiles, infrastructure, etc),” says Nick Butler, NI Senior Group Manager – Embedded Systems.

In response to these challenges, Butler says NI offers a platform-based approach in which hardware and software integration can be purchased off the shelf. This allows system designers to re-use code across targets and choose the deployment hardware that best meets their application requirements. They can also purchase their control systems, HMIs, motor drives and other components from NI, and program them all using a single programming language, LabVIEW. “Using a platform-based approach improves productivity and efficiency because system designers can develop expertise in a single toolchain and use this to develop an incredibly wide variety of embedded control and embedded monitoring systems,” says Butler.

In August, NI introduced several new control systems which have been optimized for the IIoT. “These controllers are ideal for the IIoT because they can perform computation, communication and control which are key requirements for IIoT systems,” says Butler. “These controllers can connect to virtually any kind of I/O, from sensors to cameras to motors, etc., which is also a foundational element for IIoT systems.”

The high-performance CompactRIO Controller is an example of one of these new controllers. According to Butler, it features a user-programmable Xilinx Kintex-7 FPGA, and four or eight slots for C Series I/O modules for high-performance control and monitoring in harsh environments. It has the ability to consolidate many common tasks in a single controller, helping reduce system cost, development time and complexity. Both the new Controller for FlexRIO and the Single-Board RIO Controller enable users to re-use code from previous designs, further aiding engineers’ development time.

Phillips says the design space is currently in the midst of a technology revolution due to the IIoT bringing together once-disparate concepts. While there are numerous distinct design approaches currently used by the engineering community, he says design software will begin evolving to integrate these design approaches together into a singular, consolidated approach. “As the complexity of these systems of systems continues to evolve, integrating disparate design tools into one cohesive approach will ultimately be the action that provides the step function in reducing design time necessary to keep pace with this quickly evolving market,” he says.

More simulation will be the way industries continue to evolve and make the design process easier for engineers, says Lamberg. One of the reasons for this has been the rapid evolution of Advanced Driver Assistance Systems (ADAS), particularly in the automotive industry. He notes that it has been estimated that several tens of millions of road miles must be driven to validate the autonomous driving functions, making simulation an extremely important tool for developing these systems in a time-efficient manner. And as manufacturers have begun reducing the amount of prototypes they produce, simulation has becoming increasingly more important. Lamberg says tests will increasingly be run in pure simulation environments directly on a PC due to the time and cost savings it can provide.

“The future of the next few years will be affected by further establishing the role of PC-based simulation as a complement to ‘classical’ HIL simulation,” he explains. “Simulation will not be limited to a specific platform. There will be a trend towards more heterogenous, federated, simulation landscapes where different kinds of simulators can be flexibly interconnected through standardized interfaces.” He adds that dSPACE is among those already conducting research into this.

Matt Ladzinski, Vice President, Americas, of NAFEMS Ltd. (The International Association for the Engineering Modelling, Analysis and Simulation Community), agrees that the simulation industry is prime to grow in the next five years. While it has remained a relatively small industry with just under 1 million expert users, it has seen double-digit growth nearly every year over the past three decades.

“Simulation is a key enabler to increased competitiveness,” he says, “because it allows companies to make better design decisions upfront.”

As an international, non-profit organization aimed at supporting the simulation engineering community, NAFEMS conducts various activities in order to highlight and draw attention to the factors affecting the industry and its users. NAFEMS activities include training sessions and conferences, as well as publishing articles and white papers to help address these factors and get the word out to software vendors about what engineers need from their products.  “We try to really focus on the end users, their requirements, what they need to succeed in their businesses,” says Ladzinski. “Through that we can say, ‘This is what industry is telling us, and this is what we need to be focusing on.’”

NAFEMS recently announced it will conduct a new webinar series over the next year entitled “Simulation 20/20 – The Next Five Years!” It will consist of a total of 14 webinars focused on the critical topics currently facing the industry as determined by input NAFEMS received from end users, software companies and consultants.  In addition, it will address the industry’s impending paradigm shift—the exponential growth potential of simulation. This is due to the fact that it is becoming an increasingly more important tool. “Simulation is of great value to everyone, but is still principally handled by the ‘expert’ users,” says Ladzinski.

He notes, however, that this growth potential could be hindered if software companies do not start making their tools easier to use and more accessible. Additionally, experts should package their expertise in applications so that others in product development may be able to leverage simulation in a safe and effective manner.

“Everybody needs to work together at this point to really highlight the value of simulation because it has such tremendous impact on business that it requires everybody to re-evaluate their model, to look at it and really understand the impact it has on competitiveness and future product development in general,” concludes Ladzinski.

Simulation applications provide an easier means of using and extracting simulation data without needing to be a CAE expert.

(NOTE: IF ROOM, use NationalInstruments 5602c6f0741c4 image with this sidebar)