The mobile off-highway industry faces some of the strictest emissions and noise standards in its history, and fan drives and clutches can help meet those goals. 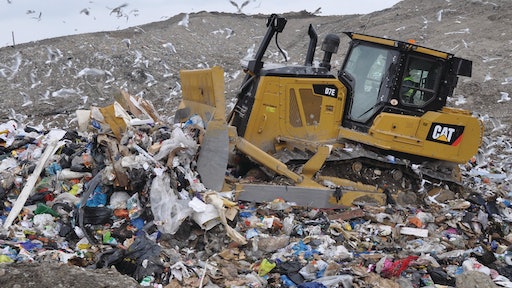 When fan drives and clutches were first installed on diesel engines more than 30 years ago, it was to help increase fuel economy. Traditional direct-drive systems required a significant amount of horsepower to constantly spin the fan blades and pull air through the radiator. They did so regardless of engine temperature: if the engine was on, the fan was spinning. Today, fan drives have come of age with propulsion options (electric, hydraulic and mechanical) and new technology.

The mobile off-highway industry faces some of the strictest emissions and noise standards in its history, and fan drives can help meet those goals. The primary reasons OEMs today chose to use variable speed fan drives are to reduce fuel consumption and noise output. There are other benefits, too.

The C9.3 engine that powers Caterpillar’s D7E electric drive track-type tractor is entirely belt-free, which has helped it deliver low-cost production in a range of applications: it uses up to 30% less fuel than the mechanical-drive Cat D7R. “The efficiency numbers that we get with the D7E are not typical,” says Mike Betz, engineering technical team leader for Medium Tractor Products, Caterpillar. “Typical programs might see a fuel efficiency improvement of 5%. We are getting huge benefits from the machine when considering the total savings provided by all of its features.”

By using the electricity provided by the tractor’s engine-driven generator, Cat’s engineers were able to electrify components that would normally have been driving by the engine – such as the air-conditioning compressor and water pump. In the case of the air conditioner, the entire system sits in a box on the cab’s roof. With all of the necessary components inside that box, refrigerant lines are not running throughout the tractor.

The cooling fan on the D7E is also installed away from the engine, and is hydraulically driven. “Because we can run the fan on demand, we end up netting a savings over a belt-driven fan.” Released from its belt drive, Betz’s team moved the fan to the opposite side of the radiator and placed it in a sucker mode for increased efficiency.

“Not having the belts in the engine compartment helps in high debris applications,” says Betz. “Waste can get wrapped up in the belts and break them, so in the end it is a big reliability benefit.”

That feature bodes well for the D7E Waste Handler, introduced earlier this year for landfill applications. To help keep trash out, a heavy radiator guard shields the D7E’s three-section cooling system. A new dual-hinge design allows the guard to fold away completely for easy cleaning access, and the system (engine, propulsion-module and charge-air cooling) is designed as a single-plane, eliminating a stacked arrangement of individual coolers that could trap debris. Wider radiator-fin spacing lets debris smaller pass through. The automatically reversing hydraulic fan purges debris from the coolers and perforated engine enclosures.

Hydraulic-driven cooling systems have been around for a while, says Gary Gotting, vice president of sales and marketing, High Country Tek, Nevada City, CA, and are “accepted as a way to improve on mechanical systems and move large volumes of air quickly with small-footprint motors that conveniently hide inside the fan's mounting hub.” High Country Tek is an independent designer and producer of hydraulic fan system (HFS) controllers.

Electronic fan system controllers from High Country Tek typically run electrical operated proportional valves mounted directly to the hydraulic motors or work with a pressure compensator to change the fan speed. Less complicated HFS controllers use standard temperature sensors that mount in the fluid path and are wired to the controller to give a varying signal that will modulate the fan speed based on the comparison between actual measured temperature and a set point value in the controller.

The entry level HFS controller can measure up to three temperature channels, while another product line allows the user to fully exploit the SAE J1939 data protocol while having multiple features that are all user selectable through the configuration software. High Country Tek’s J1939 controllers avoid the need for external sensors. “The J1939 data can be either ‘RAW’ meaning we receive individual temperature data for ‘charge air‘, ‘engine coolant’ and ‘transmission oil’ or we receive ‘conditioned’ data which is a combined drivetrain value sent by the Engine Control Module (ECM) as a value between 0 to 100% fan speed requirement,” says Gotting.

Hydraulically controlled fans have competition. The engineers at Horton Inc., Roseville, MN, have been busy as its OEM customers prepare to sell machines in a world powered by Tier 4-compliant engines.

“Even though the OEM’s equipment sales were down over the past year, engineering are working overtime to solve fuel economy, noise and heat problems related to the new emissions technology,” says Neal Shawaluk, sales director, Off-Highway/Industrial/Specialty, Horton. To OEMs looking at variable fan speed options, Horton offers its electronic viscous fan clutches.

“Prior to the advent of viscous clutch technology the only way to solve those challenges was with hydraulics. Our sights are set very high as far as the implementation of this electronic viscous clutch technology goes,” he admits. “Even when running close to 100% load, cooling systems are designed for the worst-case scenario, say running at a full load, all day in 120 F temperatures. But on a cooler day the fan might only need to come on 70% of the time. Dropping the fan speed by 30% can recover half of the fan horsepower. The money that can be saved is huge.”

Ease of installation for the electronic viscous fan clutches means that many OEMs are listing them as options. This ensures the base machine is cost-competitive on the price sheet, while giving the salesperson an opportunity to explain the cost-saving benefits of variable speed fan drives.

“When our R&D guys come to work, all they think about is how they can increase the efficiency of the cooling system,” says Shawaluk. Lately, reducing noise plays a big role in their research. Regulation in Europe requires that equipment sold there get a CE rating for its maximum noise level. “There is a big noise benefit with variable fan drives. Noise is a form of power, so when you drop the fan speed by 70% you are pulling out about half the fan noise.” Horton is working to educate engineers about the noise regulations.   “Small OEMs often don’t understand how it affects them, or what they will be able to do in order to sell machines in Europe.”

Gerry Eubank, engineering manager, DCM Mfg., likes electric fans for their versatility: “You can put the fan anywhere on the machine. In that regard, we are seeing electric fans being used for primary engine coolers.” The Grand Prairie, TX-based company offers a variety of air-moving products for on- and off-highway applications.

A potential downside to electric fans is that they are not reversible. “But because most fan blades are not designed to reverse, you’re only applying 80% of the pressure that embedded the material in the first place,” says Eubank. “We like to see a little inclination to the heat exchanger so the dirt falls out by gravity. Debris has a hard time packing in there, or it will build up to a certain level and fall out.”

As emission regulations tighten, Shawaluk predicts most OEMs will have to look at offering variable fan drives, whether hydraulic or electronic. He finds that when it comes to selling variable fan drives, there are two different hot buttons for OEM engineers. Concerns about fuel and noise can cover 90% of the industry, but they may be looking at other benefits, as well. For example, Horton provided its clutches to a customer using skid steers for paper recycling, a dusty environment. “After installing the clutches the customer's service intervals for cleaning the radiators increased,” says Shawaluk. “By running the fan only when needed it extended their cleaning interval from every day to three.”