Go with the energy flow

AGCO’s Gleaner brand launches a reconfigured feeder process that utilizes the natural flow of crop into a combine’s processor and finds numerous system efficiencies along the way. 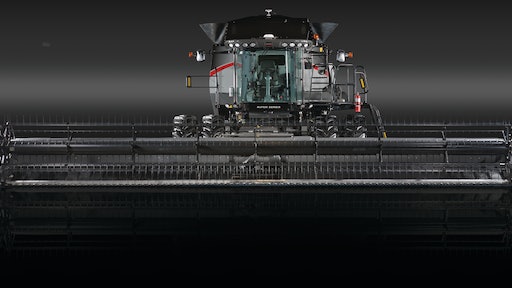 There are laws that bind us to our capabilities. Working with and within the laws of physics are what engineers are accomplishing every day. The law of conservation of energy states that energy cannot be created nor destroyed… but as engineers and equipment owners are painfully aware, energy can be wasted, lost, captured and repurposed. Parasitic losses are any loads on the primary power source that do not contribute to the tractive efforts of the vehicle. The amount of energy necessary for an agriculture harvester to feed crop into the machine for processing can draw significant power from the engine, for example.

Working with the directional flow of energy instead of fighting against it can harness energy instead of waste it, lowering the amount of energy necessary to complete a task and possibly improving overall machine efficiency in the process. Gleaner’s S8 Super Series Class 8 transverse rotary combine, launched on August 15 of this year (product information, 11109278), was introduced on the Optimum Harvesting Performance platform. The platform is founded on a vision of the combine machine from 1967 to tangentially feed crop through a combine to compliment the natural flow feeding process. “You want to make sure to keep the crop mat flat and consistent as it is fed into the processor for even threshing and separating,” explains Kevin Bien, Gleaner Brand Manager, AGCO (company information, 10727147), Duluth, GA.

Other combines are axial with the cylinder or rotor sitting parallel to the crop and a feed drum to force material in as it’s compressed. Gleaner has designed its combine to feed the crop perpendicular to the rotor’s position which allows the material to be fed naturally into the processor. “The crop comes in flat and consistent with the width of the mat the same as the width of the opening of the processor. We don’t change the direction of the material; we don’t have to compress it to fit the processor. We’re harnessing the natural flow of the material and reducing parasitic losses on the engine that were occurring by running the processor harder than necessary,” Bien explains. Because of the tangential orientation, the S8 can use a simpler design configuration with straight-through shafts without the need for 90-degree gearboxes or CVT drives found on other combines.

Gleaner gained capacity with its S7 Series platform three years ago when it increased its cage, processor and rotor system diameter to 30 inches giving the machine 6,047 square inches of threshing and separating area. Inside the Gleaner-exclusive 360 degree perforated rotor cage are helical bars which allow the material to move from one end to the other and remove discharge residue from the threshing and separating process. “Our two-stage cleaning system with accelerator roll technology allows Gleaner to reduce shoe load while increasing cleaning capacity without adding length or weight to the shoe, as well as perform on slopes up to 23% grade without severe slope sensitivity,” Bien says. Once the crop is threshed and separated, it is dropped into one of two distribution augers which are running opposite one another, centered underneath the processor, designed to meter the crop to Gleaner’s patented accelerator rolls that accelerate the crop at four times the speed of gravity. “We have a large 13 inch diameter curvature blade fan that pulls air at a constant speed from underneath the machine to get a consistent airflow. We use a fan choke to control the air by opening and closing an upper and lower air duct. The upper duct creates air blasts off the fan which does two thirds of the cleaning before the grain ever hits the cleaning shoe. Other combine models do all of their pre-cleaning at the shoe. With the Gleaner, if there is a wet crop making the grain heavier, the shoe load is greatly reduced.”

The reevaluated machine design concept also allowed for a more compact machine—with an overall machine height of 12 feet 4 inches—and a lower center of gravity. The unitized, welded mainframe offers true center line design for a light and balanced weight distribution for the combine. The Gleaner S88 (S88 refers to the Class 8 model of the S8 vehicle series) model in particular can be as much as 16,500 pounds lighter than competitive Class 8 combines, allowing the Gleaner to achieve lower field compaction and to work in muddy or wet conditions where other heavier machines would have traction issues. This also allows Gleaner to have one of the largest grain bin capacities and burn less fuel working in the field.

“Our fuel capacity, due to the lower weight of the vehicle, allowed us to go from a 150 gallon tank to a 230 gallon tank, a 53% increase. We’ll be burning less fuel and have greater fuel storing capacity, which means operators can be in the field longer,” Bien says. The fuel tank additional weight was put directly over the drive axle to keep the machine weight balanced.

A Tier 4 Final compliant AGCO Power (company information, 10739729), Linnavuori, Finland, 9.8-liter, 7-cylinder engine powers the S88 and S78 models using a combination of selective catalytic reduction (SCR) and cooled exhaust gas recirculation (cEGR) technology (see this AGCO Power engine and the rest of the company’s engine line on OEM Off-Highway’s online Engine Spec Guide at www.OEMOffHighway.com/SpecGuide). The SmartCooling system, developed by Gleaner and a Canadian manufacturer, features a variable pitch reversing radiator fan. The system is measuring engine parameters (coolant temperature, air intake temperature and hydraulic oil temperature) via the CANbus system as the machine is working in the field. Every 15 minutes for five seconds the radiator fan reverses itself to eliminate debris caught in the radiator screen. It then switches to a 40 degree pitch and blows out the engine compartment before returning to variable pitch to save horsepower draw and fuel use. “At 80 F, our system is saving about 66% of the horsepower it would normally take to run the radiator fan,” says Bien.

Gleaner’s unique transverse design places the processor and the engine further back in the machine than axial machines, buffered by the grain bin and fuel tank, providing a quieter cab. “In the last 24 months we have further quieted the cab down with newly designed door seals, adding a slight curvature in the glass, sound deadening material and insulation, thus reducing noise by as much as 3 dB(A),” Bien says.

Three years ago, the Gleaner brand began pre-wiring its cabs for telemetry, recognizing the industry shift to monitor and track equipment while it’s running in the field. “For our 2013 models we also moved from our assisted-steering solution being an option to being Auto-Guide ready. That means the steering valve, top dock bracket, wire harnesses, sensors—all of the system components are already built into the combine at the factory level to integrate any system the customer wants,” says Bien. “The 2014 models have Auto-Guide set up as an a la carte system. The customer can have a base level of accuracy and upgrade with snap-in modules without having to buy a whole new system.” (Auto-Guide 3000 product information, 11109222).

A machine’s design inspiration can start at any point and time, and if the idea has a strong foundation, can carry through for years. Gleaner’s S8 Super Series combine optimizes harvesting performance while driving down parasitic loss by lowering the amount of power needed to move through the field. “The Optimum Harvesting Performance platform concept takes all of these features into consideration, all while reducing fuel use and compaction with a lighter weight platform,” says Bien.