Telehandler Horsepower: How Much Is Enough?

A telescopic handler’s engine capacity plays a crucial role in determining which model to use for a project. 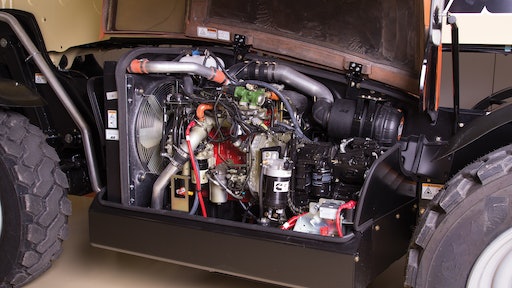 Over the last 35 years, telescopic handlers – commonly known as telehandlers – have evolved from basic, rough-terrain forklifts to the high-performance and capacity machines we know today. To meet the demands of ever-increasing loads and lift heights, the engine horsepower specified by manufacturers has increased accordingly. At the same time, global off-highway emissions legislation has progressed, reducing harmful gasses and particulate emissions from diesel engines along the way and improving air-quality for everyone – but especially those working around equipment day-to-day.

To clean up exhaust, engine manufacturers have had to develop an array of technological solutions. To begin with, the design of injection and combustion systems was rapidly developed, creating a more lean and efficient combustion process. Electronic control of injectors and the high-pressure, common-rail injection systems were implemented, followed by the more widespread use of turbo chargers. A byproduct of this technology was increasing the power-density of engines, an increase in the horsepower generated from the same size engines.

As the stages, or tiers, of global legislation progress, the need to begin recirculating some of the exhaust gasses (EGR) became necessary to give a secondary-burn of some of the exhaust and more completely consume the chemicals and particles being emitted. Now, in the final stages of the U.S. and European legislation, it is necessary to add special exhaust components that scrub the remaining exhaust and create chemical reactions that break down the harmful emissions and remove the remaining particles, burning them off in the process.

Not so widely understood is that this lean burn, high compression and recirculated exhaust gas has significantly increased the heat energy generated in the engine and, therefore, places a significant demand on the engine and machine cooling system. Increased hydraulic, transmission and engine performance all must be dealt with by larger coolers and more powerful cooling fans – all of which apply high parasitic loads to the engine, thus reducing the net horsepower available. In some cases, where high ambient temperatures combine with high loads, up to 15% of the horsepower is consumed by the fan in the cooling system.

The materials and processes used in manufacturing these new exhaust components are costly. When added to the electronic sensors and computers necessary to monitor them, the cost of engines has significantly increased. Fortunately, the new exhaust-aftertreatment systems are designed to be extremely durable and last well into the overall life of the machine, providing years of reliable operation. However, should maintenance not be carried out per the manufacturer’s guidance, reduced reliability is a risk. Moreover, if the fuel and oils used in the engine are not adequately stored, distributed and filled, or paid attention to the quality and cleanliness of the fluids themselves, more rapid deterioration or even damage can occur.

With a wide range of engine horsepower to select from, the right choice can be difficult to make. There is, however, one important break-point in the power ranges to understand – if the engine is above or below 74 hp (55 kW).

For engines below 74 hp, current engines are already at their final stage of emissions legislation. This typically means they only require a diesel oxidation catalyst (DOC) that oxidizes the exhaust gases, converting the hydrocarbons into carbon dioxide and water vapor. If the fuels used are low in sulfur content, this simple system basically replaces the exhaust muffler and has no other complicated systems.

The big advantage of the below-74 hp engine is there is effectively no change to the current operations on site. No additional fluids must be supplied or stored on site, there is no confusion over what fluid to put in what tank, and the risk of damaging costly components is greatly reduced for both the telehandler owner and operator.

Particularly for rental applications and general construction site use, the 74 hp engine delivers more than enough power for all normal operations – the only compromise being speed during combined operations and working on steeper grades.

Above 74 hp, engines are now like the on-highway truck engines and have an additional system on-board. The selective catalytic reaction (SCR) system uses diesel exhaust fluid (DEF) precisely injected into the exhaust stream to convert harmful nitrogen oxide (NOx) into nitrogen, water and small amounts of carbon dioxide. The SCR system requires a special tank to carry the DEF, with a specially-calibrated fluid level and fluid quality sensor. This sensor measures not only the presence of DEF but also that the correct fluid has been filled and is of the right quality.

As a key component of the emissions certification of the engine, the SCR system must be correctly maintained and always active. This also means there is an automated defrosting system prior to the injection pump and injector into the exhaust system. Storing, decanting and filling the machine with clean, high-quality DEF is very important for a trouble-free operation. Although common in on-highway vehicles, this can be a challenge to some customers and on some work sites. Diesel exhaust fluid will deteriorate if stored incorrectly and, if the DEF system on the machine is not well maintained, the fluid can also deteriorate in the tank.

While the SCR system may sound complicated, there are advantages for the customer.  Compliance with current legislation and reduced impact on the environment is a requirement for many customers. The higher horsepower from the engine also translates into higher performance and productivity. This can best be seen in increased speed and tractive effort, which is essential in applications requiring high productivity, using attachments such as buckets and where the machine is travelling significant distances across site or on roads, especially when combined with grades and higher loads.

Typical applications benefiting from more available horsepower and tractive effort, in combination with powerful hydraulic performance, include agricultural and semi-industrial applications. The additional power allows for productive loading cycles of loose material and heavy load-and-carry across rough terrain and steep grades. Even trailer towing or use of high-flow attachments, such as brushes and spreaders, are possible, taking advantage of the versatility of the telehandler.

In conclusion, there is a wide range of engine power ratings available to match any job.  With engines available below the 74 hp threshold, the option to simplify the operation of a telehandler to suit the operating environment provides the customer with more choice. Where out-and-out productivity is not essential, the benefits of lower operating costs and robustness can be realized. Where performance and productivity are at a premium, machine performance can be optimized.

The B6.7 Propane is suited for several applications, including medium-duty truck, vocational, school bus, and terminal tractor markets, making it a low-emissions solution designed to meet or exceed EPA and CARB regulations in 2024 and beyond.
Cummins Inc.
March 3, 2022
Follow Us