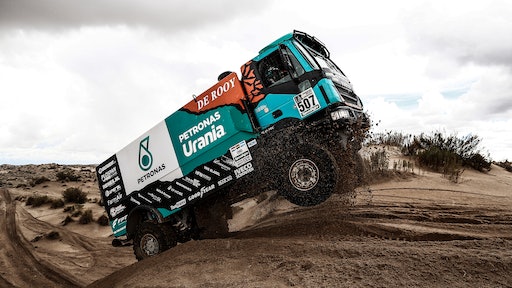 After 9,000 Km, the 39th edition of the Dakar Rally has drawn to a close, and Gerard de Rooy - memorable winner of the 2012 and 2016 editions of the race - placed third with his #500 IVECO Powerstar. FPT Industrial was once again the proud technical sponsor of the PETRONAS De Rooy IVECO Team and co-sponsor of the 2017 race. The IVECO Powerstar driven by Federico Villagra finished behind De Rooy at the rally in fourth place.

Ton van Genugten’s and Wuf van Ginkel’s IVECO Trakkers travelled together – with Van Genugten, behind the wheel of the #507, finishing at 16th place, while Van Ginkel arrived behind his teammate in 17th position.

The PETRONAS De Rooy IVECO Team trucks were powered by 13 L engines designed and produced by FPT Industrial, and are renowned for their reliability in on-road long-haul missions as well as in agriculture applications, such as large tractors and harvesters. IVECO vehicles Cursor 13 engines were specially engineered by FPT Industrial for such a challenging rally and can reach more than 900 hp. The engines have proven their reliability and robustness by conquering the most challenging South American terrain.

Passion, power and expertise are at the heart of the support provided by FPT Industrial to team PETRONAS De Rooy IVECO. FPT Industrial has illustrated the preparation of the Dakar engines in the video "Powering the soul of racing."

The story unfolds at the FPT Industrial R&D Center in Arbon, Switzerland, where the engineer Jürg Spuler has spent the year working on the development of the Cursor 13 engines, featured in the IVECO racing trucks.

As a specialist in turbocharging and engine brakes, Spuler has been part of the racing engines team for 12 years. He says, "I am responsible for the power development of the engine. The Cursor 13 is very well suited to racing because it is one of the best and most robust engines ever designed. In addition to its power and reliability, it remains compact and light: there is very little fine-tuning to be done from a mechanical perspective."