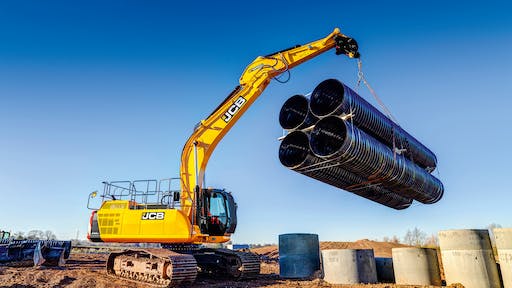 For the first time, Rolls-Royce will be supplying MTU engines for use in excavators, having won an order from British construction equipment manufacturer JCB. MTU’s Series 1000 engines are compliant with EU Stage IV and EPA Tier 4 Final emissions legislation and are to be used to power new excavators in JCB’s JS 300, JS 330 and JS 370 Series. The construction machinery manufacturer is choosing MTU for its excavators for the first time. The MTU brand is part of Rolls-Royce Power Systems.

The excavators weigh between 30 and 37 tonnes and each is to be powered by a 6-cylinder Series 1000 inline engine from MTU delivering up to 210 kW. Also driven by MTU Series 1000 units is JCB’s new 457 wheel loader, which was launched on the market 2 years ago.

Tim Burnhope, JCB Chief Innovation and Growth Officer, says, “JCB already uses MTU engines in its flagship 457 wheeled loaders. The introduction of the engine into three of our JS excavators will offer customers fuel savings of up to 10%.”

Bernd Krüper, Vice President Industrial Business including Construction & Agriculture at MTU adds, “Use of our engines in JCB's new excavators marks our entry into another very important and high-volume segment of the C&I market, and we are very proud that JCB is choosing to endorse our EU Stage IV-compliant units. This is another step forward in our long and successful partnership.”

A new JS 370 excavator equipped with an MTU 6R 1000 unit is to be unveiled at the CONEXPO trade show in Las Vegas in March.

Hamilton Engine will be responsible for all sales and service network development for Scania engines in the Midwest.
Scania USA
June 26, 2020
Follow Us