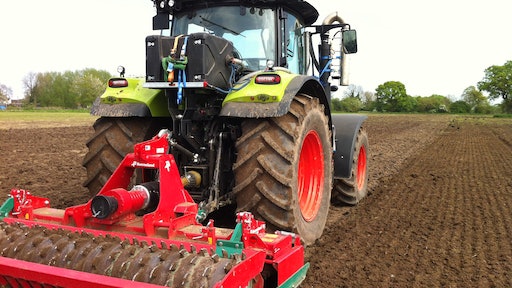 Two CLAAS tractors, one featuring an SCR system and the other with an EGR and DPF system, were evaluated in the field to determine real-world fuel economy data.

Getting to the root of agricultural vehicle emissions, Harper Adams University has teamed up with Emissions Analytics, the leading provider of real-world emissions measurement, to provide the first real-world economy figures for tractors.

This innovative collaboration between Emissions Analytics and the agricultural sector has the potential to allow farmers to save fuel, reduce harmful emissions and provide a framework for the future testing of all non-road mobile machinery (N-RMM).

With the aim of the project to investigate the differences between theoretical CO2 conversion factors and real-world factors for N-RMM, the results have demonstrated the feasibility of using a Portable Emissions Measurement System (PEMS) in an agricultural application.

Both tractors were trialled in three conditions: using a dynamometer to add a variable load to the PTO shaft; road testing at high speed with a fully laden trailer; and in a field with a subsoiler and power harrow. As with Emissions Analytics’ evaluation of road vehicles, the CO, CO2, NOx and THC emissions data was combined with vehicle data such as GPS position, engine load and speed to provide a highly detailed measure of efficiency.

The results, analysed by student Miles Metcalfe as part of his MEng Agricultural Engineering course, with supervision by Ph.D. student Rob Fillingham, demonstrated that by using the traditional conversion factors supplied by DEFRA, CO2 emissions are being over estimated.

"One of the early challenges was gaining sufficiently detailed data, to help us understand how everyday use would impact efficiency," explains Fillingham. "We could map Emissions Analytics’ emissions information against the tractor’s activity, to provide quantifiable and actionable results."

As regulations change for N-RMM, the value of PEMS to measure compliance will allow Emissions Analytics to broaden its research into other off-highway sectors where fuel economy has been hard to quantify.

Data that truly represents emissions in the field