Data that truly represents emissions in the field

A new method for testing emissions output of off-highway equipment in the field may provide manufacturers with a better means of optimizing their designs. 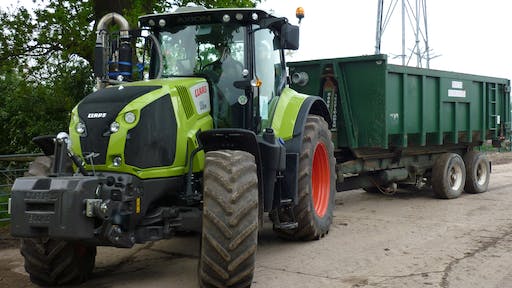 On-road testing, with a loaded and unloaded trailer, was one of the three conditions the test tractors were put through to evaluate emissions output in various operating scenarios.

Accurately determining the amount of emissions released by a piece of equipment continues to prove a challenging endeavor. While methods do exist, most are theoretical and determined using a test bed within a laboratory setting which doesn’t necessarily represent how the machine actually operates in the field.

Harper Adams University and Emissions Analytics, both based in the UK, recently partnered together to conduct in-field testing of agricultural equipment using a Portable Emissions Measurement System (PEMS, learn more, 12036051). “We wanted to actually measure the emissions in real time, when the machine was being used how it’s meant to be,” explains Rob Fillingham, a Ph.D. student from Harper Adams University leading the project. This enables different parameters such as soil conditions and depths of cultivation to be taken into account which can affect load on the engine, and thus emissions.

Legislation is typically a key driver of how much testing manufacturers will invest in due to the costs involved, which is why not much in-field emissions testing had been done prior to this research project. As emissions and fuel efficiency regulations continue to evolve, however, this may change, which prompted Fillingham to initiate the research project as part of his Ph.D. studies (see sidebar, pg. xx).

In addition, Fillingham wanted to investigate how emissions not currently regulated by the European Union, such as greenhouse gas (GHG) and carbon dioxide (CO2), could be measured. He says that some of the life cycle assessments for determining emissions output use conversion factors to calculate the output of emissions such as CO2. “But these assume all the carbon produced and combusted turns into CO2 when actually some of it becomes carbon monoxide, some of it remains hydrocarbons. [We’re] trying to look at that relationship in a little more detail.”

The power of PEMS

For the project, Harper Adams University and Emissions Analytics used PEMS technology manufactured by Sensors Inc. Attached directly to the tractor, the PEMS equipment collects and analyzes tailpipe emissions every second at a rate of 1 hertz. “You get thousands of data points depending on how long you’re testing for,” says Jane Thomas, Global Sales Manager at Emissions Analytics.

An adapter placed over the exhaust is used to capture the tailpipe emissions which are fed into a flow tube where the exact amount of emissions output is measured. “A small sample of the exhaust is taken into the gas analyzer and it measures the constituent parts of the gas,” explains Thomas. The system is able to separately measure nitric oxide (NO), nitrogen dioxide (NO2) and then provide a combined figure for NOx output, as well as individually measure carbon monoxide (CO) and CO2. Once the CO2 measurement has been determined, Thomas says the carbon balance method can be used to determine the vehicle’s fuel consumption. Total hydrocarbon output can also be measured by the system.

According to Thomas, the PEMS equipment has numerous checks built into it to ensure no errors occur during data collection. She says Emissions Analytics also processes and analyzes the data after its collected to further guarantee it is accurate and there are no abnormalities. “One of the key benefits of PEMS is you can instantly spot if something strange is going on, stop the test, fix the problem and then carry on testing. It’s a very versatile way of emissions testing,” she says.

Until the partnership with Harper Adams University, the majority of the testing Emissions Analytics had done with the PEMS technology was on passenger cars and heavy-duty commercial vehicles. However, it had been looking for an opportunity to get into the off-road market. Thomas says the PEMS can be used to test anything with an engine. For testing off-highway equipment, the only change necessary was the use of a larger flow tube for capturing all of the exhaust gas flow. There was also concern about the potential of dust and dirt affecting the PEMS equipment, so Miles Metcalfe, who undertook the project as part of his Master of Engineering degree, built a box to contain the system and keep it safe from debris.

Fillingham says a key aspect of the project was ensuring the tractors would still have full functionality throughout the testing process. “We wanted to make sure we could put an implement on the back and use both of [the tractors'] linkages just as they would in the real world, so that dictated a little bit where we could fit the PEMS equipment,” he explains. Using CAD software, Metcalfe determined the best mounting point for the main PEMS unit would be just above the tractors’ rear linkages behind the back window. Harper Adams also worked closely with Emissions Analytics to determine the amount of pipework necessary and direction of the flow tubes for capturing the emissions, as well as any potential issues such as temperature losses. “It was very much a process where we developed the way forward together,” says Fillingham.

Two tractors, donated by CLAAS of Germany, with different aftertreatment systems were used for the project—an Axion 830 with selective catalytic reduction (SCR) and an Arion 650 using a combination of exhaust gas recirculation (EGR) and a diesel particulate filter (DPF). Each tractor was tested in three conditions, the first of which involved the tractors traveling on the roadway at higher speeds, both with and without a fully loaded trailer attached. In-field testing consisted of the tractors doing heavy cultivation work using two different types of implements. The final testing condition was loading the engine via the PTO. Fillingham says this was done by connecting a dynamometer to each tractor’s PTO and loading the engine as the tractors were put through replicated duty cycles.

As the tractors were run through these test conditions, the PEMS collected data which was combined with vehicle data including GPS position, engine load and speed to provide an overall picture of the tractors’ performance.

A path to better optimization

Through this research project, Harper Adams University and Emissions Analytics have shown measuring emissions output of off-road equipment can be done in the field using PEMS technology. Having the ability to do so will be beneficial for manufacturers not only for complying with upcoming regulations, but also to help improve their design process.

Data collected from the tractors can offer insight into where inefficiencies may exist in a system. Additionally, it can provide manufacturers with a means of comparing different types of systems and increase their chances of choosing the best option for fuel performance and consumption in the field. “[Manufacturers] can develop a better understanding of how the machine is actually used and where the peaks and current emissions are, and then perhaps optimize and redesign their equipment accordingly to reduce those,” says Fillingham.

For Emissions Analytics, the ability to test off-highway equipment with PEMS adds to its portfolio of services it can offer manufacturers. “From our point of view, it demonstrates our capability [and] also demonstrates the power of PEMS equipment and the insights it can reveal,” says Thomas. “We can go to engine manufacturers and say ‘you produce engines for off-highway machinery, we’ve done this project and this is the sort of intelligence we can reveal by working together on a project.’”

In September 2014, the European Commission announced its proposed Stage V emissions standards for non-road mobile machinery (NRMM) which for the first time will require in-use vehicle testing. “They’re aware that up to date there have been companies who are able to make their engines suit the test cycles they’re being tested to, but still they think there needs to be some sort of actual in-use, real-life vehicle testing,” explains Robert Fillingham, Ph.D. student at Harper Adams University.

The proposal calls for monitoring of in-use gaseous and particulate emissions by testing engines installed in machinery operated over its normal duty cycles. Pilot programs to determine appropriate testing procedures will be conducted by the European Commission. It anticipates detailed provisions and technical specifications to be adopted by December 2016.

Under Stage V, more engine power ranges will be regulated including those below 19 kW and above 560 kW. Also for the first time particle number (PN) emissions will be regulated in order to account for ultrafine particles. Currently a PN limit of 1×1012 kWh-1 has been proposed for engines ranging between 19 and 560 kW, which will require all NRMM engines be equipped with a diesel particulate filter (DPF).

Learn more about these companies

The companies will bring together their engineering, testing and manufacturing products to aid new and existing customers.
Taylor Dynamometer
July 17, 2020

Increased customer demand for testing assistance has prompted the company to open a second validation center.
Freudenberg-NOK
July 9, 2020
Follow Us