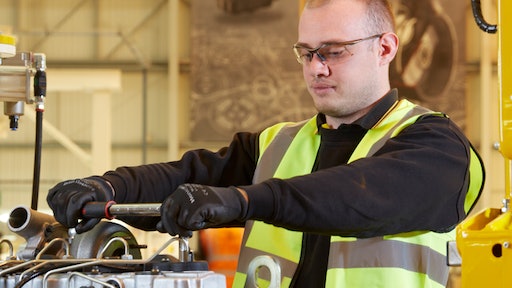 JCB announces plans to begin production of six-cylinder engines with the addition of the JCB Dieselmax 672 to its world-leading engine line-up. The introduction of the engine represents an investment of around $68.5 million. By the time the engine goes into full production later this year, its launch will have created more than 50 new jobs.

In just over eight years, JCB has gone from being new to the field of engine manufacturing to a major global engine producer with a reputation for fuel efficiency and innovation. The first engine rolled off JCB’s UK production line in November 2004. In 2011, JCB began producing engines at its  Indian headquarters in Ballabgarh. To date, JCB has produced more than 250,000 engines globally.

“In a relatively short space of time we have become a major producer of engines and today more than 70% of JCB’s machines are powered by the engines we manufacture,” says JCB Chairman Sir Anthony Bamford. “The move into six-cylinder engine production is a historic moment for our business and a natural step to take. We look forward to setting new standards in performance and fuel efficiency.”

The JCB Dieselmax 672 is based on the company’s successful four-cylinder 4.8-liter Dieselmax engine, with a high degree of parts commonality across the two engine platforms. The Dieselmax engine has been production for more than eight years, with many engines worldwide running reliably after more than 20,000 hours of service. Today’s Dieselmax features electronic control, Delphi common rail fuel injection and fixed geometry turbocharging.

Initially the Dieselmax 672 will be produced to meet Stage II emissions standards for growth markets including Russia, Brazil and China. The engine will be seen first in JCB’s JS360 crawler excavator for those territories, but will also be used in additional machines as time progresses.

The six-cylinder engine will be offered with ratings of 188 hp, 221 hp, 255 hp and with a maximum output of 302 hp. Maximum torque is an impressive 885 lb.-ft. More impressive still, JCB has managed to produce an incredibly efficient engine in the Dieselmax 672, promising up to an 8% increase in fuel efficiency compared to previous engines in the JS excavator line. In testing, the 7.2-liter engine has recorded a specific fuel consumption of just 189g/kWh while delivering excellent performance and rapid response.

The six-cylinder engines will be built on a dedicated line at JCB Power Systems’ modern purpose-built facility in Derbyshire, UK. In development for more than two years, the engines have already completed more than 50,000 hours of testing, 30,000 of which have been in machines working in the field.

The Dieselmax engines have 500-hour service intervals, maintaining low operating costs and maximum uptime for customers. The engines will also be offered as part of the company’s OEM product line, for use in non-JCB machinery.

“The six-cylinder Dieselmax 672 is the ultimate expression of our Dieselmax engine design philosophy,” says Alan Tolley, director of engine programs at JCB Power Systems. “Through the use of innovative engine design and technological development we have produced a reliable, highly durable and incredibly fuel efficient engine, that will go on to power our larger equipment in many markets around the world.”

In 2006, two four-cylinder Dieselmax engines successfully powered JCB’s record-breaking Dieselmax car to a world land speed record of 350 mph on the Salt Flats of Bonneville. The engineering expertise involved in that successful record attempt has been invested in the development of this latest highly efficient addition to the JCB engine family.

Engine Rightsizing: Finding the best fit for your application

Why you need Tier 4 Final for Power Generation

The engine is certified to a NOx emission standard of 0.02 grams per brake horsepower and has a 10% better carbon dioxide emission rate.
Power Solutions International Inc. (PSI)
October 28, 2020

Customers have the option to power their industrial forklift with LPG or gasoline with a simple dashboard mounted switch.
Manitou Group
October 26, 2020

Investments over the next several years will bring in new manufacturing capabilities and prepare for the addition of a new global engine platform to be launched in 2024.
Cummins Inc.
October 15, 2020
Follow Us