Scania has approved the use of hydrotreated vegetable oil in its Euro 6 range to help reduce emissions up to 90%. 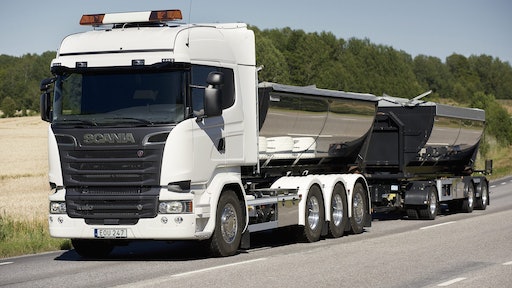 Scania has given the green light to hydrotreated vegetable oil (HVO) being used to power its Euro 6 range, provided the fuel used meets technical specification TS15940. Vehicles using HVO – which chemically mimics fossil-fuel-based diesel – can under optimal condition achieve up to a 90% reduction in CO2 emissions. HVO does not affect a vehicle’s characteristics or its maintenance requirements.

Örjan Åslund is Head of Product Affairs at Scania. “We have decided to give our blessing to the use of HVO biodiesel in our diesel vehicles,” he says. “Scania is the leading manufacturer when it comes to offering powertrains for alternatives fuels, and we have considerable experience with the practical side of driving using HVO. It’s an alternative fuel that has relatively few disadvantages when compared to diesel, while also offering a large reduction in CO2 emissions.”

Earlier this year, Scania approved HVO for use in all types of Euro 5 vehicles and all types of operations. In cooperation with customers, the company also initiated a field test in Sweden involving some 100 trucks with Euro 6 engines.

“Thanks to the certification and our own decision, all Scania hauliers with Euro 6 engines can use HVO, including in buses,” says Åslund. “I know that interest is very high. The challenge for most operators will be in getting access to HVO, as both production and distribution facilities are still limited.”

HVO is a biofuel that has been much discussed in recent years, and a number of leading manufacturers have incorporated HVO into their ranges. The fuel is based on either vegetable oil or animal fats. Hydrogen gas is used to create hydrocarbon chains that mimic fossil-fuel-based diesel. This means that the fuel can also be distributed and used in the same way as regular diesel, including with regard to its thermal and storage properties.

The certification of HVO complements Scania’s already marketing-leading range of Euro 6 engines and power trains for alternative fuels. Scania has for some time offered five Euro 6 engines for use with FAME biodiesel, as well as two gas engines. Scania has additionally indicated that both bioethanol- and hybrid solutions will also be introduced shortly.

“Scania is continuing to take the lead in products and services for sustainable transport,” Åslund says. “From Scania’s perspective, it’s clear that a variety of solutions are needed in the form of different alternative and renewable fuels. And to meet the global climate challenge, it’s necessary to explore several different avenues, ranging from more efficient vehicles to smarter transport and renewable fuels.”