Iveco has introduced its new Eurocargo truck which features a single emissions-reduction system and a new turbocharger to respond more dynamically when accelerating for a fuel savings of up to 8%. 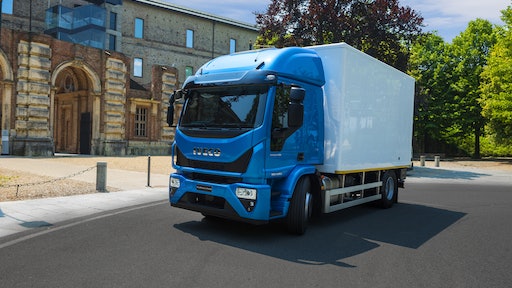 The celebration of Iveco’s 40th anniversary this year sees the launch of the new Eurocargo, the truck the city likes. Eurocargo is the ideal partner in urban missions: respectful of people and the environment, featuring all new functionality and design. It is a vehicle that offers lower fuel consumption whilst confirming its super and steady handling and versatility.

Just two years after the launch of the Euro VI version, Iveco has made further improvements to a vehicle which has already been chosen by half a million customers in Europe, Africa, the Middle East, Australia and Latin America.

Eurocargo is the technology and market leader in Europe, and the new model offers important innovations in terms of engines, safety, comfort, cost reduction and environmental sustainability, thus completing the evolution of the Iveco range, and following closely on the success of Stralis and Daily, which won International Truck of the Year 2013, and International Van of the Year 2015, respectively.

The new Eurocargo is the only Euro VI medium range vehicle in its category to adopt a single anti-emission system, the HI-SCR system with passive diesel particulate filter (DPF). The HI-SCR is the only emission control system which does not change the combustion process – because it works through fresh air intake rather than exhaust gas recirculation.

Medium range vehicles are mainly used for missions such as urban distribution and municipal services: this is why Iveco has set performance improvement and fuel consumption reduction as a top priority. With a range of eight engines, the new Eurocargo adopts two Iveco Tector 5, 4-cylinder, 160 and 190 hp engines, optimized to suit the typical operating conditions of urban missions.

Moreover, thanks to the development of a new turbocharger, as the compression ratio and torque output increase at speeds below 1,200 rpm, Eurocargo is able to respond more dynamically when accelerating and upon start up, which results in fuel savings of up to 8%.

Lastly, thanks to the EcoSwitch system, which lengthens sixth speed engagement times and limits down-shifting into fourth, and the EcoRoll function (offered on 12-speed transmissions) which takes advantage of vehicle inertia in downhill situations, Eurocargo reduces fuel consumption when on extra-urban routes and long runs.

Safety is also at the heart of Eurocargo's renewal: in addition to the steering wheel airbag and steering wheel controls, the new Eurocargo is available with all the key driving assistance systems, such as the Lane Departure Warning System (LDWS), Advanced Emergency Braking System (AEBS) and Adaptive Cruise Control (ACC). To improve safety and visibility when driving, LED Daytime Running Lights (DRL) have also been adopted as standard. Xenon headlights can be specified as an option.

Eurocargo not only incorporates many new features, it is also built around an entirely new design – which reflects the style pioneered by Daily – with new air deflectors and the new front grille that traces a smile beneath the large brand name in the centre.

The advertising campaign that will accompany the new Eurocargo, along with the slogan "The truck the city likes", places the vehicle as a central figure in urban settings. The vehicle can be driven with ease in the city, a city that everybody wants call home, a city that merges and becomes a perfectly integrated part of the everyday lives of the public.

“The new Eurocargo,” - says Lahutte “is the ideal partner in the city: it is respectful of people and the environment; it offers a substantial update in design, safety and functionality; it consumes less fuel and consequently reduces CO2 emissions. Finally it maintains the same maneuverability with improved engine torque and driver comfort. As declared in our new pay-off 'Iveco: your partner for sustainable transport', that positions us as one of the most eco-friendly truck maker[s] in Europe as well as throughout the world, with the new Eurocargo Iveco confirms his engagement for sustainable transport.”