Volvo Penta Stage IV/Tier 4 Final compliant engines are helping power the newest wood chipper designed by German OEM Albach which will be on display at Agritechnica 2015. 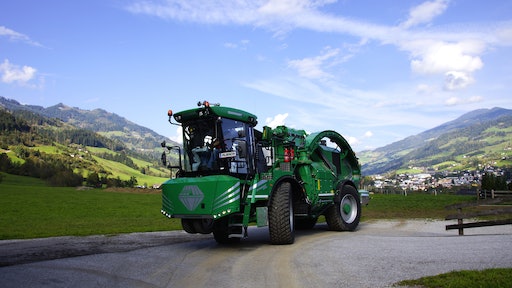 It takes an innovative engine to outfit an innovative wood chipper. German OEM Albach met its match in Volvo Penta for its new Diamant 2000 chipper, on display at Agritechnica 2015, November 10 to 14 in Hanover, Germany.

When Albach first got started in 2008, wood chippers came in two basic forms: self-propelled models, which could drive on the highway, or trailers pulled by tractors which could maneuver easily in the woods. There was no model that could do both. But the German manufacturer changed the face of forestry by building a self-propelled wood chipper that could reach speeds of up to 70 km/h on the autobahn but could also make its way through the forest. The revolutionary machine won over the industry and became a market leader in short order.

Albach began working with Volvo Penta two years ago, and it is now releasing a new result of the collaboration: an innovative and efficient wood chipper called the Diamant 2000. Albach’s newest model is an extremely powerful machine with an output of 380 m3 per hour. The redesigned chipping rotor increased output by 15% while decreasing overall energy consumption and reducing dust. The Diamant 2000 is highly fuel efficient compared to other self-propelled wood chippers in its class, cutting fuel usage by as much as 20%. Eco-drive mode can also be used to save even more fuel via a slower throttle response.

“Albach did everything it could with this model to minimize fuel consumption and maximize productivity,” says Miron Thoms, head of industrial engines for Volvo Penta Central Europe. “We’re proud to help contribute to such an efficient and innovative machine.”

Volvo Penta equips the Diamant 2000 with 16-liter engines in a choice of three power ratings: 450 kW, 515 kW and 565 kW. Albach chose to go with Volvo Penta when emissions regulations become more stringent with Stage IV/Tier 4 Final. “We looked at a variety of engine brands, but Volvo Penta impressed us with how light and compact its units are, while at the same time exhibiting remarkable power density and fuel efficiency,” says Albert Gaul, who works in construction and engineering at Albach.

Volvo Penta also offered an unparalleled level of support and access. After supporting Albach with application engineers who advised on driveline integration, Volvo Penta assigned the manufacturer a single point person who would be easily contactable to provide quick answers and advice. “It’s important to have one person who is with you throughout the entire process and who’s available to have face-to-face discussions with you,” Gaul says. “In Volvo Penta, we have found a very good partner.”

Albach tested its first Volvo Penta engine in one of its machines last year. After 1,000 hours with no problems, the OEM had found its engine, and the choice was made to equip all Albach wood chippers with Volvo Penta units.

While the prototype made an appearance at the show in 2014, this is the first time Albach is showing the Diamant 2000 at Agritechnica. The Volvo Penta-equipped machine will be at Albach’s Stand G12 in Hall 25. Volvo Penta will be showing its D5 and D16 engines and selective catalytic reduction (SCR) technology on its stand in Hall 17, D33.