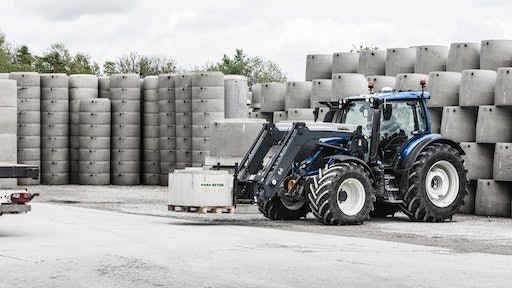 The Valtra N Series has entered its fourth generation. The four-cylinder N Series now boasts many of the same features appreciated by customers as found on its big brother, the six-cylinder T Series, which reached its fourth generation a year ago. The new T Series has proven to be a success, and now the same successful concept is being introduced in the smaller class of tractors that now has even more compact dimensions than before.

The new cab on the fourth generation N Series is similar to that on the new T Series. The cab offers excellent visibility in all directions (with up to 6.5 sq. m of glass) and is extremely quiet (<70 db). The cab can be comprehensively specified, for example with a high-end stereo with integrated woofer, a front windscreen wiper that covers 270 degrees, heated front and rear screens, and a TwinTrac reverse drive system. Customers who do a lot of front loader work may specify an extra window in the roof that offers an unobstructed view to the implement when the loader is in its highest position.

The N Series is available with either one or two doors. A new option is the SkyView forest cab, which offers enhanced visibility to the rear and upwards thanks to a large polycarbonate window with wiper. Other forest specifications include narrow mudguards and a 160-liter steel fuel tank. The standard size of the fuel tank is 250 liters, the optional size is 300 liters, and the capacity of the urea tank is 45 liters.

The fourth generation T Series began the revolution in powershift transmissions by making it possible for the first time to operate the powershift like a stepless transmission. The powershift tractors also have a hill-hold feature, a patented hydraulics assistant and Automatic Slip Regulator (ASR) to ensure optimal ease of use, productivity and efficiency for demanding tasks.

ASR represents a completely new innovation in the tractor industry. As in passenger cars, the traction control system limits engine power if the sensors and tire speed exceed a set level. The idea behind ASR is to help the driver maintain the best pulling ratio and fuel efficiency while avoiding damage to the ground.

A suitable transmission for all tasks

The PTO has three speeds, and ground speed PTO is available as preferred by forest and transport contractors.

AGCO Power has implemented an SCR Only strategy since 2009, systematically developing SCR solutions. The result is the most fuel efficient and responsive engine on the market. The N104, N114 and N124 models are powered by four-cylinder 4.4-liter AGCO Power engines, while the N134, N154 and N174 models have 4.9-liter engines. The SCR system takes care of exhaust emissions without the need for a diesel particulate filter or exhaust gas recirculation system. The SCR Only system reduces fuel consumption and extends engine life.

Valtra’s Sigma Power technology provides 10 extra horsepower when the PTO is under sufficient load. In the N174 Simga+ model the system provides 20 extra horsepower. All models also feature the transport boost function, which provides extra power when driving on the road.

The N114 and N154 represent Valtra’s traditional EcoPower models in which the driver can select between eco and normal mode. In eco mode the engine speed is reduced by 10 to 20%, and maximum torque is achieved at lower rpm. Eco mode reduces fuel consumption by up to 10% compared to the normal driving mode.

Easy to use and maintain

The fourth generation N Series has a turning radius of just 4.5 meters and a wheelbase of 2665 mm, making it supremely agile for front loader work but also extremely stable on the road. Ground clearance is an impressive 55 cm, making the N Series suitable for forest work, snow plowing, harvesting and field work.

The service interval is 600 hours, saving money and allowing uninterrupted work during the peak season. Scheduled maintenance can also be performed faster than before. For daily inspections the driver has to  make just five checks, which can be done very easily.

The N Series is tailor made according to the customer’s preferences at the Valtra factory in Suolahti, Finland. Hundreds of features and options are available, creating millions of potential combinations. For example, the specification list includes seven different color options, a pivoting front linkage and an auxiliary heater. Naturally, the new N Series can be specified also with remote telemetry and the AutoGuide 3000 steering assist system. If all of these features and options are still not enough, the customer’s tractor can be further customized in the Valtra Unlimited studio, where even the sky is not the limit.