SAME Deutz-Fahr and Deutz AG collaborated on the conversion of a diesel engine to CNG which was then installed in a tractor and found to reduce pollutants without any performance loss. 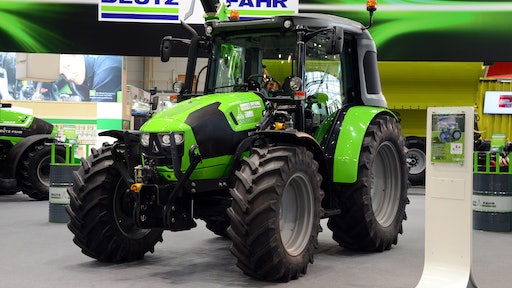 Agricultural machinery manufacturer SAME Deutz-Fahr introduced a dedicated compressed natural gas (CNG)-powered agricultural tractor at Agritechnica 2015 in Hannover, developed as part of a joint research project with Deutz AG and Rostock University and funded by the German Federal Environmental Foundation (DBU) project. Working together, engineers converted a diesel engine to run on natural gas and successfully installed it in a tractor, reducing pollutants and CO2 emissions without any loss of performance.

The project was developed in response to the increasing demand for alternative drive concepts in agriculture and industry. The Rostock University research team was headed by Professor Horst Harndorf from the Department of Reciprocating Engines and Combustion Engines. With its recent development, the University of Rostock, which has closely cooperated with Deutz AG for many years, says it has set a new benchmark in alternative engine technology for agriculture.

The prototype Deutz-Fahr 5120C, which can also be operated with renewable natural gas, undertook initial test runs in September 2015. Wolfgang Beberdick, Head of Thermodynamics Compact, Air and V engines at DEUTZ, explained at the time, “The tests were a complete success. The collaboration with the University of Rostock was extremely rich in content for both sides and there were important insights won into the development of gas engines.” The tractor is now being field-tested by Thünen Institute for Organic Agriculture, including typical application situations such as mulching.

The project converted an industrial diesel engine to natural gas, replacing the self-igniting diesel injectors on the Deutz TCD 3.6-liter (50 to 90 kW and a maximum torque of 480 Nm) with a spark ignition system and adapting several other components.

Sasche Prehn, graduate engineer at the University of Rostock who was instrumental in the redevelopment, explained that with this new system greenhouse gas emissions have been able to be significantly reduced, methane emissions are close to zero (less than 0.5 g/kWh) and the performance is equivalent to the diesel engine.

The Deutz prototype 5120C has a CNG tank capacity of 236 liters, divided into seven tanks. Overall, there is accommodation for eight CNG tanks on the tractor, increasing the fuel volume to 316 liters (about 60 kg CNG). This amount corresponds to approximately 77 liters of diesel fuel.

Although the machine has a shorter range than a comparable diesel tractor, emissions experiments by the University of Rostock demonstrated 10 to 14% less CO2 and emissions of nitrogen oxides and particulates are considerably lower, offering tangible benefits especially in confined spaces. NOx emissions were down 90%. Deutz says that depending on the fuel being compared, saving of CO2 emissions of up to 24% can be achieved using natural gas.

Deutz sees the avoidance of greenhouse gases as one of the central tasks of the industry in order to protect the global climate. The drive-concept natural gas tractor already meets the planned emissions level V (Stage V) without aids such as AdBlue or additional diesel particulate filter. Instead a methane-optimized three-way catalyst can be used, which offers a significant cost advantage.