The 50/50 joint venture will produce MTU Series 4000 diesel engines for China, and open new growth opportunities in the Asian market. 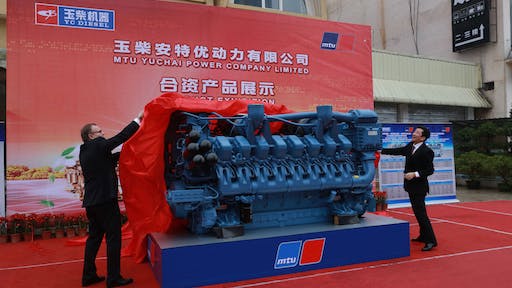 MTU Friedrichshafen GmbH (MTU), a subsidiary of Rolls-Royce Power Systems, and China Yuchai International Limited’s main operating subsidiary, Guangxi Yuchai Machinery Company Ltd. (GYMCL), have signed an agreement to set up a 50/50 joint venture for the production, under licence from MTU, of MTU diesel engines in China. Each party will invest 75 million RMB (around 10.5 million Euro) in the joint venture.

The joint venture will be based at GYMCL’s primary manufacturing facilities in Yulin City in Guangxi Province, south China and is expected to begin production in 2017. The joint venture will produce MTU Series 4000 diesel engines compliant with China Tier 3 emissions standards with power outputs ranging from 1,400-3,490 kW, primarily for the Chinese off-highway market, in particular for power generation and oil & gas applications.

The joint venture will open up new growth opportunities for both partners, particularly in China and Asia. The joint venture will enable better access to the Chinese market for the MTU Series 4000 diesel engines, via the extensive sales and service network operated by GYMCL. GYMCL will, as a result of the joint venture, be able to offer its customers technologically advanced engines that have a proven record on the global market. The joint venture engines will be marketed by GYMCL and MTU Suzhou within China and by MTU and its subsidiaries exclusively outside China. From 2020, the sales territory of GYMCL will be extended to selected countries in South East Asia such as Vietnam, Thailand and Malaysia. After a ramp-up phase of 3-5 years, the scope of the joint venture might (subject to further discussion) be extended to research and development activities, as well as potentially direct sales from the joint venture to the customer.

The establishment of the joint venture is subject to the fulfillment of certain conditions including but not limited to approvals by the relevant authorities.