Hyundai's new HL980 wheel loader is its largest machine in the HL Series with an operating weight of 31,000 kg and featuring a Stage IV engine designed to be 10% more fuel efficient. 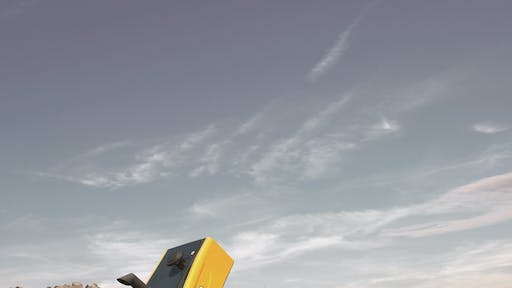 Hyundai used the bauma Munich exhibition as a platform to launch the new HL980 – the largest machine in the new HL Wheeled Loader series. The new addition offers the very best in wheeled loader technology.

The robust HL980 has been engineered to Hyundai’s high standards and designed following thorough research amongst operators world-wide asking what they expected of the next generation of wheel loaders. The result is a tough new machine with outstanding power and performance.

The new HL980 has an operating weight of 31,000 kg and powering the new machine is the very latest Stage IV SCANIA DC13 engine without DPF (Diesel Particle Filter), which makes the HL980 up to 10% more fuel efficient in truck loading, and able to achieve up to 8% more productivity in comparison to its 9A Series predecessor.

Silent, safe and comfortable, the 10% larger ROPS/FOG/FOPS new cabin with fully adjustable seat provides an ergonomic working environment that offers the ultimate in comfort for the operator.

The new cabin is fully soundproofed using state-of-the-art noise reduction technology which ensures maximum silence (68 dB) when working in noisy environments such as quarries or waste handling depots – the new HL980 model benefits from a 4 dB reduction in cabin noise over the 9A Series of machines.

In addition to being more fuel efficient – the new HL Series (which includes the HL955 and the HL960) has many other environmentally friendly features.

Automatic shutdown of the engine prevents unnecessary fuel consumption and emissions. The HL Series turns off the engine when it enters into an ‘idling’ state. Operators can select operating mode and ‘idling’ time depending on work environments which improves its efficiency even further. The five-speed transmission with lock-up clutch on this machine also aids fuel consumption depending on the working conditions.

The ECO Gauge feature enables consistent economic operation through frequent checks of the machine’s operating state. The ECO gauge level changes color with the engine torque and fuel efficiency level. In addition, it monitors fuel consumption such as average rate and the total amount of fuel consumed which is displayed on the monitor.

The HL Series also features a ‘travel speed limit control’ where the operator can limit the maximum travelling speed within a range of 20-40 km/h to suit diverse working conditions which improves operational effectiveness.

The HL980 is optimized to enable operators to access accurate equipment data in quick time. This feature is of particular importance when working in tough environments to improve productivity.

The intelligent 7-in. touchscreen monitor is similar to a smart phone display and is larger than the previous models and is easily read. The Audio System, which includes a radio, has an integrated Bluetooth hands free feature, and a built in microphone allowing the operator to safely take and make calls when in the cab.

The ‘Infotainment’ system also allows the operator to enjoy the Miracast system which works via the WiFi of the operator’s smart phone and enables easy use of the smart phones features on the big screen including navigation, web surfing, watching videos and listening to music.

The new HL980 has fingertip controls for boom, bucket and third hydraulic line as standard. All of the models in the HL Series can also be fitted with joystick steering as an option.

Touchscreen monitor and EH controls allow several (new) features like ‘Soft End Stop’, bucket priority and boom bucket detent mode, to be controlled through the touchscreen. The ‘Soft End Stop’ delivers - when an attachment reaches the end of a stroke - a ‘shock free’ operation by reducing the speed of the attachment near the end stroke. This function can be disabled through the monitor should the operator not want to use this function.

Hyundai engineers have also redesigned the wheel loader buckets on the HL Series and they now have a better fill factor, an additional spill guard to minimize spillage of loaded materials and changeable heel plates. The HL980 boasts up to 8% greater productivity in comparison to the 9A Series.

A flick of a switch is what it takes to gain complete access to the engine compartment of Hyundai’s new wheel loader – a brand new feature not seen before on the previous range of Hyundai wheeled loaders. The fully retractable engine hood allows easy cleaning and maintenance.

The HL Series has a large-volume air cleaner, an automatic dust ejector and a three-stage turbo pre-cleaner, as an option, to improve the replacement cycle and durability. The machine also has a fully sealed engine room, designed to prevent the possibility of fire caused by the inflow of foreign materials.