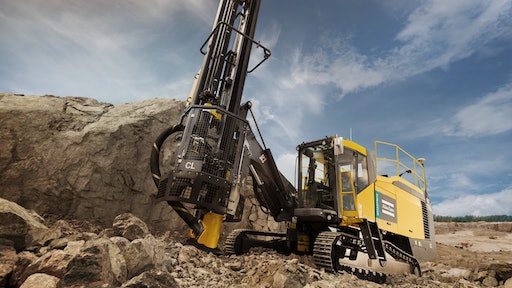 Atlas Copco’s new ultra fuel efficient drill rig, the SmartROC CL, was one of the star attractions at MINExpo 2016 where it was unveiled for the first time in public ahead of its official world launch in November.

For the thousands of open pit miners around the world who use Down-The-Hole drilling technology, the new rig will certainly be seen as a major step forward. Not only have the designers managed to slash fuel consumption by 45%, averaging 35 l/h using a 165 mm drill bit, they have also boosted the achievable penetration rate by 50% compared with conventional DTH rigs currently in use.

How does the SmartROC CL do it?

Mattias Hjerpe, Product Manager, says, “Many of our customers in, for example, Australia, South Africa, Latin America and Scandinavia, who use the DTH drilling method, now have a great opportunity to slash their fuel bills and boost their productivity at the same time. It’s a winning combination.”

When the first new rigs are shipped out for delivery in the first quarter of 2017, Australian miners will be first in line. Tom Ross, Business Line Manager, Atlas Copco Australia, says, “The demand for the new SmartROC CL is already very strong here and our customers are very much looking forward to its arrival – and to becoming the world’s first owners.”

The same sentiments are echoed in Latin America, and particularly in Chile where Vidal Martin, Business Line Manager, Atlas Copco Chilena, is convinced that the rig will be especially appreciated as it has proved to function well at high altitudes.

At a time when miners are facing extra tough economic conditions, a drill rig that can substantially reduce running costs and boost productivity is clearly worth investigating.