A variable-speed device installed between the chassis engine and transmission on Elgin Sweeper's new configuration allows the engine to simultaneously power both the truck and the sweeper. 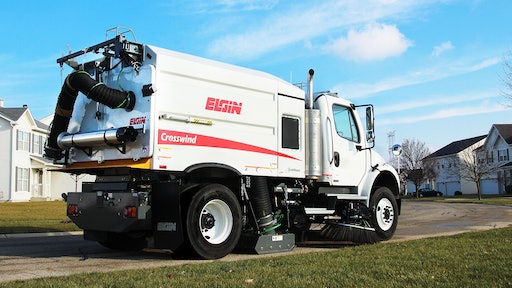 Elgin Sweeper, the leading manufacturer of street sweepers, introduces an innovative single-engine configuration of its popular Crosswind regenerative air sweeper used for cleaning large, paved areas such as streets, parking lots and airport runways. A variable-speed device installed between the chassis engine and transmission on the new configuration allows the engine to simultaneously power both the truck and the sweeper.

The new Crosswind allows the operator to switch between modes with a simple push of a button on the fly, without the need to stop. According to Higgins, the new sweeper is very easy to operate, with minimal training required compared to prior designs.

“Although traditional single- and twin-engine sweepers clean effectively and satisfy EPA Tier 4 requirements, we knew we could create a better solution, and our customers agreed,” says Ron Schmidt, Vice President of Technology Development at Elgin Sweeper.

Elgin Sweeper invested significant dollars and several years of research developing the new single-engine Crosswind before offering pre-production models to customers for field tests. “Thousands of hours of real-world use provided valuable customer feedback that helped us further refine the product and the technology before introducing this breakthrough sweeper to the market,” Schmidt says.

“The complaints we most often hear from operators of twin-engine sweepers are related to the noise and vibration from the auxiliary engine,” says James Crockett, Strategic Product Manager at Elgin Sweeper. “Because the average operator sweeps six hours per day, the din of the engine and the tremors of the auxiliary engine and its drivetrain can be both irritating and fatiguing to the operator. The single engine, combined with Elgin Sweeper’s Quiet Pak sound-dampening technology, helps minimize vibration and noise on the new Crosswind.”

Because the chassis engine on the new Crosswind operates under a higher load, it minimizes particulate matter buildup that would require active regeneration to burn off. The time-consuming and costly maintenance checks, after-treatments and additional service requirements associated with an auxiliary engine are eliminated on the single-engine Crosswind. Downtime and expenses are drastically reduced with only one set of engine maintenance requirements.

“Performing oil changes, belt inspections and filter replacements on the single-engine Crosswind costs a fraction of the annual maintenance required on twin-engine sweepers,” Crockett says. “Those cost savings will have a more positive impact on a municipal or contractor customer’s bottom line.”