FPT is exhibiting its Cursor X powertrain concept which can use various fuels and packaging to demonstrate future engine technology possibilities. 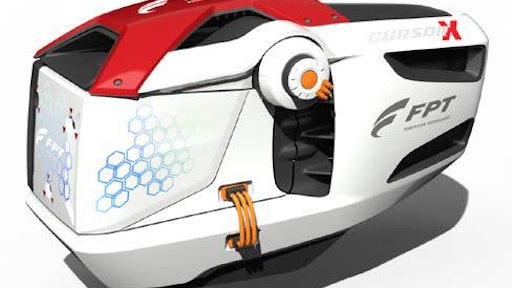 The Consumer Electronics Show (CES) 2020 will once again highlight the latest technologies and futuristic vision of companies in a variety of industries. This include FPT Industrial which is showcasing its symbol for tomorrow’s mobility and sustainability, the Cursor X 4.0 Power Source Concept.

FPT is exhibiting the Cursor X in a sound studio designed to resemble a state-of-the art recording studio. The goal is to provide a unique means of showcasing the Cursor X which demonstrates the company's commitment to alternative fuel research and development. The exhibit also gives visitors the opportunity to experience each step in the concept’s creation through the voices of FPT Industrial engineers.

At the booth, each “M” has a dedicated totem and a special podcast also available on the Spotify “The Sound of the Future” playlist.

Demonstrating visions of the future

As part of its CES exhibit, FPT has made a video which contemplates the Power Source Concept in futuristic applications—from commercial applications to city missions, and from advanced construction equipment to total zero-emission mobility and transport.

In addiction to that, three times a day the booth will host a live sketching performance of a designer from the CNH Industrial Design Center who will draw the Cursor X in ever new environments and missions, highlighting the commitment of FPT Industrial to alternative fuels’ research and development. Live sketching sessions will be held from January 7-9 at 11 a.m., 1 p.m. and 4 p.m.

Sounds of the future

FPT has partnered with three-time Oscar winning Italian composer Giorgio Moroder to create "the sound of the future." The two have created a special playlist on Spotify featuring the artist’s new creation, Preludio, a 4-minute song which has become the unique and distinctive soundscape for FPT Industrial engines.

Historically, Preludio (Prelude) is a short piece of music – generally an introduction – and for FPT it cues a musical performance before the engine performance begins. A part of Preludio will be implemented as a welcome turn-key sound in all the vehicles powered by the company's next-generation of innovative and sustainable engines.

The Spotify playlist also features a selection of songs from Giorgio Moroder, with some of his favorite hits, including Donna Summer’s “Love to love you Baby” and “I feel love”, Blondie’s “Call me”, David Bowie’s “Cat people”, Freddie Mercury’s “Love kills”, Irene Cara’s “What a Feeling” and obviously Moroder’s “From here to eternity”. Users can also listen to more recent hits including those by Daft Punk, Deja Vu and Sia.

The playlist also includes four podcast episodes, recorded by the FPT team featuring Giorgio Moroder. The “Designed for Planet Earth” episodes are dedicated to the four features of the Cursor X.

FPT and Moroder will release Preludio during a live session at its CES booth (Convention Center, South Hall 2, booth 26236).

The partnership between FPT and Moroder was first teased at bauma 2019. Since then Moroder has been at work side by side with the FPT Industrial Innovation team as they develop their engines of the future and he composes the sound to accompany them.

“The sound has to be as innovative as the engine is and has to fill the gap between the engine and the music. It’s great to know that my creation will be part of FPT Industrial brand touch points. Talking with engineers in Arbon was a great inspiration to me and when creating the sound, I always kept their experience in my mind,” comments Moroder.

Being the father of disco music, Moroder is an artist that has had a deep impact through his musical innovation and he perfectly fits all of the FPT brand values. “I have always loved to experiment with the relationship between man and machine. The song ‘I Feel Love’ has a mechanical, electronic rhythm made by the synthesizer and Donna’s (Summer) amazing voice, is the human heart of the song. This innovation had so much impact in the music business that even Brian Eno told David Bowie ‘Giorgio has found the sound of the future’. I love challenges and FPT Industrial proposed something completely new and unique to me: a pioneering project, both in music and in powertrain technology,” says Moroder.

"We really want to give a voice and a soul to our engines and I am sure it will be hard to believe what we are going to hear soon. Giorgio Moroder’s creation is destined to become very familiar for millions of drivers, while giving an extraordinary contribution to driving pleasure,” says Annalisa Stupenengo, Powertrain President. “Just as Giorgio, in FPT Industrial we are driven by innovation and quality and with 150 years of experience, the brand has introduced groundbreaking solutions. For FPT Industrial this idea is destined to uplift the human-machine experience on vehicles for decades.”