Pump control on a piston-by-piston basis

To provide more efficient and precise control of hydraulic pumps, some manufacturers have began developing a new method of pump control involving the use of fast-acting electrohydraulic valves paired with each piston within in a pump. 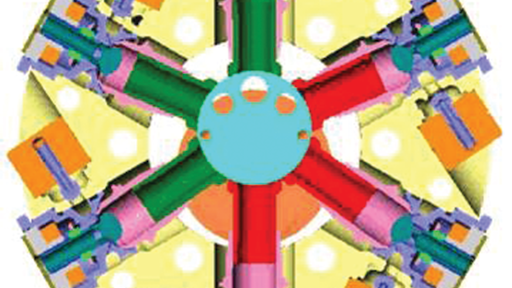 The very fast, dynamic pump control of DDPs enables improved efficiency at a component as well as a system level which leads to overall machine efficiency benefits such as improved fuel economy.

Within the last decade, Digital Displacement* pump technology has progressed from university-level research to more practical applications. Jeff Herrin, Director of Advanced Programs at Sauer-Danfoss Inc. (company information, 10056055), Ames, IA, says commercial products based on this technology are in active development and will be available in specific markets in the coming years.

A Digital Displacement pump (DDP) is a hydraulic pump which uses the same core piston pumping principles as many of the commercial pumps currently available in the market, says Herrin. The difference, however, is in how the DDP is controlled. Output flow of a DDP is controlled by fast-acting electrohydraulic valves paired with each cylinder and piston in the pump. Herrin says a nine piston DDP, for example, will have nine active valves, one per piston, providing control of the pump. Traditional pumps, on the other hand, control output flow by varying the angle of a single swashplate which controls all of the pistons in the pump simultaneously.

“The electrohydraulic valves which control the pistons have to be very fast in order to provide the pump dynamics needed for most applications of hydraulic pumps,” adds Herrin. Designing valves that are both very fast and able to pass a lot of flow through the valve body is not an easy task. “Those two requirements at the same time are a real challenge,” he says. In addition, the large number of valves needed for every DDP makes it critical for developers of DDP technology to ensure reliability and robustness of the design in any kind of production environment. “But by resolving the challenges, there comes a lot of new benefits,” says Herrin.

According to Herrin, improved operating efficiency is one of the biggest benefits to using DDP technology. “Digital Displacement pumps themselves, when compared to traditional pumps, offer significant improvements in efficiency, especially at part-load operating conditions,” he says. Because they provide very fast, dynamic pump control, DDPs offer efficiency at a component level as well as a system level, which leads to overall machine efficiency benefits such as improved fuel economy.

The faster control response of a DDP enables it to provide more precise and repeatable flow and pressure control for applications that require it, such as robotics. Currently, many of these applications use high fidelity valves to provide precise control. By using a DDP instead, the high fidelity valve can be simplified which can help reduce costs for customers. Herrin says the potential cost reduction is not a matter of DDPs costing less than traditional pumps but rather their ability to help reduce overall system design costs. When a DDP is used in place of a traditional pump, other components can be simplified or even removed from the system without sacrificing functionality. “It’s more of the system level bill of material and lifecycle costs comparison that become important and where benefits will be obvious to the OEM and also the end customer,” says Herrin.

Because DDPs are such an efficient technology, they are also well suited for use in hydraulic hybrid drivetrains. “Due to their precise controllability and excellent operating efficiency, Digital Displacement pumps and motors are actually the ideal technology for hybrid drivetrains,” says Herrin. Hybrids are designed to provide total operating efficiency of the machine over the duty cycle, and in order to achieve that, the most efficient components must be used. Herrin says at the moment, Digital Displacement is the most efficient pump and motor technology known to the industry. Additionally, the precise control requirements and dynamic response of hybrid systems favor DDPs. “If you’re going to create a hybrid system around the ideal pump and motor technology, Digital Displacement would be a great choice.”

Breaking into the market

DDPs can be used in a broad range of applications including heavy-duty mobile off-highway equipment, military vehicles and commercial on-highway vehicles. However, customer acceptance in the marketplace will be critical to the DDPs catching on. “This new pump technology will really challenge some of the paradigms that OEMs and end users think they know about hydraulic pumps,” says Herrin.

Herrin says once Sauer-Danfoss completes its development of the DDP technology, the long-term plan will be focused on bringing the technology to the marketplace and proving the benefits of the core technology and how it will be applied to various applications.

The hydraulic pump technology known as Digital Displacement was developed by Dr. Win Rampen and Professor Stephen Salter at theUniversityofEdinburgh, who in 1994 created the company known as Artemis Intelligent Power Ltd. (Artemis). Rampen and Salter’s work with Digital Displacement technology stems back to the 1970s and 1980s when they were designing high-performance multi-megawatt power take-off (PTO) systems for renewable energy devices.

In 2010, Artemis was acquired by Mitsubishi Power Systems Europe (MPSE) after it developed the concept of running transmissions for large offshore wind turbines off of Digital Displacement technology. As a part of MPSE, Artemis continues to further develop its Digital Displacement technology and expand the range of applications it can be used in, including heavy-duty mobile equipment.

Digital control of pumps can come in many forms. In September of 2012 Parker Hannifin's Hydraulic Pump Division (company information, ) released an electronically-controlled pump which uses an electronic signal instead of hydraulic fluid to drive the pump. The electronic control module for the pump is a seperate component which can be placed elsewhere within a vehicle or system, providing OEMs more design flexibility.

(if there's room, can we place the primary image from this article within the sidebar box?)

The Next Chapter for Hydraulics

At IFPE 2020, Bosch Rexroth will show technologies which are helping create the next generation of smarter, IoT-ready mobile machines.
Bosch Rexroth Corporation
March 2, 2020

Development of a cylinder linear sensor which can be divided and installed in pieces reduces shipping and installation costs for OEM customers.
Sara Jensen
February 17, 2020

At CONEXPO and IFPE 2020, Polygon will highlight its various composite bearings as well as its PolySlide composite tubing for pneumatic and hydraulic cylinders.
Polygon Company
February 11, 2020

Need for Customized Hydraulic Components on the Rise

Webtec says it has seen an increased need for customized hydraulic measurement or control solutions from customers in recent months.
Webtec
February 7, 2020

The acquisition is in line with Danfoss’ strategy to strengthen its core businesses and enhance customer value.
ACBM Editorial Staff
January 21, 2020