Headed for a fluid power renaissance?

Efforts to continue broadening fluid power research and education will be the way to further advance the industry into new technologies and applications. 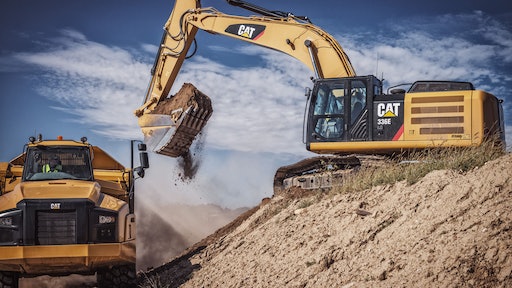 Caterpillar's hydraulic hybrid excavator provides an example of the continued potential for the fluid power industry by demonstrating the fuel efficiency and emissions reduction capabilities possible with fluid power technology.

At the 2014 Fluid Power Innovation & Research Conference (FPIRC, event information, 10754800) held by the Center for Compact and Efficient Fluid Power (CCEFP) much of the focus was on the growing potential of fluid power in the coming years. Ken Gray, Global Product Manager for Large Hydraulic Excavators at Caterpillar Inc., said during a panel discussion that he believes the fluid power industry is about to go through a renaissance period much like the engine industry did over the past several years with the advancements it made in electrification and emissions reduction. Gray said fluid power has tremendous potential in the coming years.

This sentiment was emphasized by other industry members at the conference, as well. It was said that within the next decade, advanced manufacturing, advanced powertrains for off-highway and wind power, and medical will be among the largest areas of expansion for the fluid power industry. In addition, alternative energy, robotics and compact power are all potential new applications for fluid power, and are being made possible due in part to new additive manufacturing capabilities that enable the manufacturing of previously unreachable fluid power components. Over the next two decades the new markets available for fluid power could exceed existing markets.

Implementation of new regulations, such as Phase II fuel efficiency standards for medium- and heavy-duty vehicles (read more, 11359421),could provide fluid power the chance to seize opportunities to help reduce emissions and increase fuel efficiency. Competition from power transmission methods, particularly electric technologies, has been the biggest hindrance so far to fluid power being the technology of choice. However, current market share for hybrid electric vehicles is still only 5%, and no one solution has been decided upon, stated one presenter. Caterpillar’s hydraulic hybrid excavator (learn more, 10815107 and 10815505) was mentioned as a bright spot for the industry, demonstrating the fuel efficiency and emissions reduction capabilities that are possible with fluid power.

Focusing on education will play a key part in advancing the potential of the industry by increasing the understanding of fluid power and potentially the number of people working with it on a daily basis, which can lead to the development of new ways to utilize and improve upon the technology.

The CCEFP is one of the many organizations working to expand fluid power education. Its goal is to expose every mechanical engineering student to fluid power, preparing them to either become future members of the fluid power industry workforce or educated customers who may need to implement fluid power technology at some point in their designs. The CCEFP is achieving this goal through its various education and outreach programs, such as the free online fluid power introductory course it offers to anyone in the world. As of the FPIRC, there were 5,000 people signed up to take the course.

The CCEFP said its expanded vision for the industry is to have fluid power be the technology of choice for power generation, transmission, storage and motion control, making it a complete package offering for engineers.

A large part of the CCEFP’s mission is the support of fluid power research by both students and professionals. Each year it hosts the FPIRC to showcase the various research projects being conducted by students studying fluid power. During the conference students had the opportunity to present their findings, as well as get feedback from industry professionals and peers. Over 28 presentations were given, demonstrating the wide range of technologies and applications possible using fluid power. Research projects included the testing of a hydraulically-actuated medical patient transfer device, a hydraulic flywheel accumulator with improved energy density comparable to electric versions, and the use of energy efficient fluids for improved hydraulic component and system efficiency.

The various projects presented at the 2014 FPIRC demonstrated the many capabilities that are possible within the fluid power industry, as well as the potential for its future. In addition, the varied projects helped reiterate what industry professionals such as Caterpillar’s Gray said during the conference about the industry heading towards a renaissance with all the potential new technologies and applications that will become available.

As the CCEFP and other organizations continue their efforts to expand fluid power research and education, there is no telling where the industry could go in the coming years.

All student presentations from the 2014 Fluid Power Innovation & Research Conference can be found on the CCEFP’s website at http://www.ccefp.org/get-involved/fpirc-2014/fpirc-research-breakout-sessions#Session1.

In 2014, the National Fluid Power Association (NFPA) created the Pascal Society, an annual giving society that is part of the NFPA Education and Technology Foundation. The purpose of the society is to meet the technology and workforce development needs of the U.S. fluid power industry.

It does this by bringing together members of the industry through volunteer, as well as monetary, contributions which are used to help support various industry initiatives, including the Center for Compact and Efficient Fluid Power (CCEFP).

As of December 18, 2014, 50 companies—ranging from OEMs to fluid power component manufacturers—have signed up as members of the society.

10 Years of Innovation: Hydraulic Excavators Have Come a Long Way

Hydreco Merges with Continental Hydraulics to Become a Single Company

The synergy between the brands of the Duplomatic Group allows them to offer a catalogue of products and services for industrial and mobile applications.
Continental Hydraulics Inc.
February 1, 2021

It will prepare the business for immediate sale to meet regulatory approvals and close its Eaton Hydraulics acquisition.
Danfoss - Danfoss Power Solutions
January 28, 2021

The LM06W is a screw-in, normally closed directional control valve which is leak tight at high pressures.
HYDAC International
December 4, 2020

The SRLT Medium Pressure Filters with 12 in. bowl is able to produce a much lower pressure differential at a rating of 25 gpm.
Schroeder Industries
November 18, 2020

The DW06V valves enable full pressure to be applied to all ports.
HYDAC International
November 11, 2020