Taking the Ex out of complex

Software allows a standard piece of hardware to be configured into different variations of hydraulic control functionality. 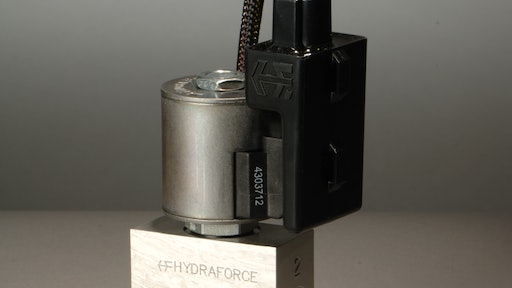 Bringing a vehicle into the electronic control era doesn’t necessarily require complex programming expertise in order to incorporate a new system functionality that is needed by the customer. Experts in electrohydraulic control systems are finding ways to take the burden of creating complex control algorithms out of the machine’s development process and offering instead prebuilt models with customization opportunities.

HydraForce recently announced its ExDR valve drivers that mount on the coil using a Deutsch DT-Series 2-pin sealed connector. Two different package types are available—the 8-pin version (notated with 0201 on the product's name) contains one input and two outputs with CAN bus, while a 4-pin version (notated with 0101) has one input and one output with shared communication. “The 8-pin version allows us to monitor in real-time because we can process the actual physical analog input pin or process the CAN message variables, whichever is chosen as the deciding factor of how to drive the outputs,” explains Chris Shader, Electronic Product Manager, HydraForce. “Just taking that one piece of hardware, you buy it with whichever version of firmware you want.”

For developers who may have developed a machine control system recently that is not positioned for a redesign anytime soon, but the OEM is adding new system functionality to the existing generation of machine and they’re out of outputs on the controller, instead of redesigning, they can use the ExDR valve drivers and via a CAN bus message, drive those two outputs and integrate new functionality into an existing machine.

"Every engineer has run into a situation where they’ve run out of I/O on their main ECU mid-design," says David Price, HydraForce Marketing Communications Manager. "With its single- or dual-output control, ExDR can get you out of the conundrum of needing just one more output for a function that was added after initial concept. The ExDR drivers have also been tested for reliable operation outdoors and can tolerate extreme temperature, vibration and moisture which make them ideal for mounting anywhere."

The “x” in ExDR is a placeholder for a variable of configuration for the firmware. Multiple personalities are available for each driver. General purpose drivers EVDR-0101A and EVDR-0201A drive one or two coil outputs with a user-defined metering profile featuring up to 3 breakpoints, and independent input/output ramps. The 0201A version can operate as a slave, responding to CAN messages.

Proportional reversing fan control EFDR-0201A modulates fan speed based on input from a temperature sensor, or CAN messages from the engine control module. The second output controls a reversing function to periodically clean debris from the vehicle's radiator. The Tier 4 emissions regulations prompted many applications to adapt variable speed fan drives in order to conserve horsepower.

Time-based proportional drivers ETDR-0101A and ETDR-0201A (not yet released) use a digital input to trigger the ramping sequence. They're useful for applications like clutch control, hot-shot or soft start. Using a digital trigger to initiate the shift, ETDR can smoothly control clutch pressure with up to six breakpoints in the timing sequence. The driver can then maintain pressure, or ramp down at a user-defined rate after the sequence completes.

The valve drivers are configurable through HydraForce’s own HF-Impulse1 software tool. This tool sets all parameters for operation and can also flash the driver with firmware updates.

“The point of these valve drivers, and the free HF-Impulse software we offer, is to control a time-based ramping profile for a clutch, for example. We’re building that into our easy-to-use software, so it eliminates having to create a complex control algorithm because the output profile is prebuilt into one of the four user interfaces we offer. It makes it easier for you, being a layman, never having programmed transmission clutch control, to get on with your day and stop worrying about creating a math model that can drive your algorithm. We’ve already done that,” says Chris James– Electronics Engineering Group Leader, HydraForce.

When the software was created for the user interface, the PC and the software were embedded into the controller and kept modular to allow the customer the option of customizing the device. The HF service tool doesn’t allow for algorithm development. “Of the derivative products we offer, we host the different firmware and binary files on our electronics portal. It gives our distributors a lot of flexibility for inventory stock,” says James. “If they have 100 EVDR versions and a customer orders an EFDR, they just have to upload that version of the firmware.”

“The service tool is for the set-up and tuning of the firmware that resides in the controller. You don’t write control logic, you pick a control method that the firmware supports. Basically, you’re selecting your desired parameters,” Shader says.

This also helps pare down the parameter options based on a customer’s selected input/outputs and slopes. A tuning window that may house 30 parameter options may only display 15 of them if the customer has chosen a simpler model. That is not to say HydraForce doesn’t have OEM customers that prefer coding the valve drivers themselves in house.

“But, at the end of the day, we know how to control our valves. That scalable, programmable slope that we built into there was based on understanding the approximate current range our valves operate in and knowing how best to control the proportionality of our broad range of proportional valves,” says Price.

With dozens of products created by HydraForce that incorporate multiple valve functions into a single cavity—compressing the envelope and driving down the installed footprint—when a valve driver is plugged into it, all that is left is a power line and CAN bus connection to have distributed hydraulic control via small manifold blocks mounted directly to the actuators. In the past, a barrier for the dispersed control architecture may have been the size of the manifold or control valve block that would have been necessary to accomplish all of the functions needed.

“The ability to remotely mount valves and run lines to distribute the control functions across the vehicle can lead to an OEM needing less of its engine compartment to house a control manifold, for example. It gives flexibility to remote mount a function for a little extra space, if necessary,” says Shader.

However, distributed architecture is limited in its adoption, claims Shader. “I think it’s about the trade-off in cost,” he explains. Buying the components for a distributed system might be higher initially, but when it comes to manufacturing the machine, it eliminates most of the cost associated with the man hours to create and route wires and hydraulic hoses through the system, plus the added risk of wear and repair.

A distributed architecture can also make a system inherently more efficient because the closer the control valve is to the actuator, the more responsive the machine is going to be, which saves horsepower and thus fuel for added energy efficiency savings. “I think Tier 4 made a lot of people think about how they utilize their horsepower more effectively, and that’s why there has been an increase in the number of people willing to consider distributed control,” says James.

Whichever architecture style an OEM chooses, using electrohydraulic control systems create opportunities for a more refined and productive machine. Valve drivers may not be new to the industry, but their continued evolution to include more compact and robust electronics continues to allow OEMs to progress the design and capabilities of off-road equipment, one precisely controlled function at a time.

The first generation of the valve driver product line was the EVDR1 launched in 2005. “Even then we had derivatives for fan drives and transmissions,” (the EFDR1 and ETDR1) says Shader. After about five years of production release, HydraForce began to see shortcomings of the product. “Originally it only had a 6-pin receptacle and it didn’t have CANbus on it. The EFDR1, for example, had a single input and no CANbus, so it was essentially a single input temperature control, and that is all it could ever be,” he says.

The second iteration (and most recently developed and launched) valve drivers feature an “A” at the end of the product name. “The second iteration was to upgrade the processor. That’s what allows us to have a small, remotely mounted device that has enough computing power to turn a complex CAN message into an easily digested input signal that can be used to drive current to the valve.” “When we decided to redesign the product, we were of course going to incorporate CANbus because we didn’t want the product to be sold and marketed as a stand-alone valve driver. We wanted to be able to market it as a slave device to a larger machine control system,” James explains. “With the new EFDR-0201A, we can use the analog input to read a physical temperature sensor, or we can pick one of the many CAN messages like oil temperature, coolant temperature or charge air temperature. Or, we can do a combination of all of them.”

The Bee Valve polypropylene couplers and adapters are chemically resistant to most acids.
Bee Valve Inc.
May 26, 2020

The DVS sectional valves offer smooth and precise operation, and will be introduced at Agritechnica 2019.
Walvoil S.p.A.
October 16, 2019

The SC12 features enhanced control behavior and a modular design for a high degree of flexibility.
Bucher Hydraulics
July 9, 2019

The LCV valves employ a CAN actuator to provide precision and functionality in a wide range of mobile applications.
Bucher Hydraulics
May 7, 2019

The RS20 platform, introduced at bauma 2019, is made up of freely combinable functional sections.
Bosch Rexroth Corporation
April 25, 2019