Get the most utility out of utility vehicles 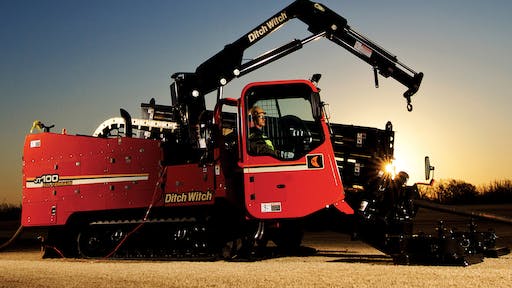 Any machine designer knows that a machine is only as good as the work it does, and how effectively it does that work. In the utility industry, effectiveness is a quiet and efficient, minimally disruptive machine for laying telecommunications, electrical, water and gas. Unlike a mini-excavator that would be used for larger-scale open trenching, a horizontal directional drill leaves much of the surface unscathed.

When it comes to horizontal directional drill vehicle engineering, there are two primary functions that must be balanced—thrust and rotational torque. Equipment classes are defined by thrust and can go up to over a million pounds, though utility work typically only requires 50,000 pounds or less, depending on the ground material.

A true measurement of the machine’s performance is how quickly it can get the job done. A drill’s carriage mechanism is where the thrust is applied and moves a rack up and down; its speed determines how many linear feet per day a contractor can install.

“You’re sharing the hydraulic system between your thrust and your rotational torque. The engineering challenge is trying to make that hydraulic system as efficient as possible so you’re not losing horsepower and maximizing the overall performance of the machine,” says Josh Beddow, Marketing Manager, Sitework Systems Dealer Business at The Toro Co. “Higher thrust means a larger engine with additional horsepower, which means a bigger frame, so you really try to optimize how much push and pull a machine will have with the smallest engine.”

“Our goal was to design a product to optimize thrust as well as rotational torque in the smallest footprint possible,” says Beddow. In the utility industry, equipment must often work in areas with limited space, so total vehicle profile must be kept to a minimum.

One of the largest challenges as of late has been the larger engine system from Tier 4 Final emissions regulations going into effect. “We had to make our engine compartments larger to accommodate the system, which makes the machines wider or longer in some cases, but we try to keep from changing the vehicle’s size whenever possible,” says Seth Matthesen, Product Manager for Drills at Ditch Witch.

Beyond simply optimizing an engine’s power, engineers must also take into consideration the noise and vibration coming from the machine. Since utility work sites are often found in residential or populated areas versus the remote locations of larger construction sites, noise regulatory compliance is a necessary design element.

“Part of noise reduction is running the engine at a lower RPM. The engine enclosure itself is also very sound proof which is challenging with Tier 4 engines because of the excessive heat that is generated during their operation,” says Matthesen.

While HDDs are tracked mobile vehicles, they spend a majority of their work life stationary and staked into the ground. “You can imagine if you have a long string of steel pipe cutting into hard rock, the operator is going to receive some jarring shocks. So we have to pay close attention to the operator environment while designing a machine, but also because those vibrations can cause noise issues, as well,” says Matthesen.

Not only does the low ambient noise fare well with the general public around the job site, but it also is safer for the operator and allows for easier communication among the crew, which creates a safer working environment.

As with any piece of diesel-powered equipment, regardless of its size or function, ultimately the OEM is looking to optimize the machine’s performance to pass along savings to its customer, especially in the Tier-4-Final-engine world we now live in. All OEMs are trying to squeeze more productivity out of a lower horsepower unit to reduce the fuel demand, but also to reduce the overall engine package.

On the bright side, Beddow says, “The transition to Tier 4 Final engines has provided us with the opportunity to draw more data off of the machine and provide that information feedback to the operator.” The additional information has helped shape design considerations for new displays to give the operator more feedback from the machine in an easier to understand format about performance and maintenance intervals.

Volvo CE is developing a digital hydraulic actuator which has shown fuel efficiency improvements of 50% in an excavator application.
Sara Jensen
September 7, 2021

The FracTran includes high reliability with a service life up to 25,000 hours, and is designed to meet the unique performance demands of hydraulic facturing customers.
Bryce Gill
June 18, 2021
Follow Us