Concentric's variable flow oil pumps are being used by several of the manufacturers participating in the DOE's Supertruck program to help increase heavy-duty truck efficiency. 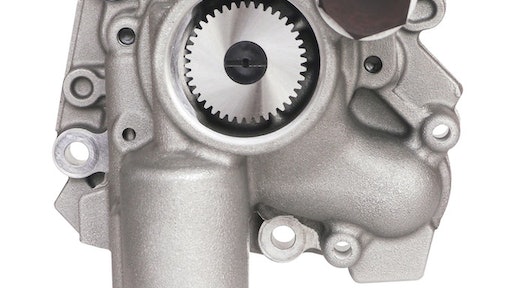 Variable flow oil pumps developed by Concentric AB are making a significant contribution to the US-funded “Supertruck” program which is developing a new generation of fuel-efficient heavy-duty trucks.

In January 2010, the U.S. Department of Energy launched a four-year program with the objective of developing technologies to improve over-the-road fuel consumption of a Class 8 truck by 50%. Three cost-shared projects were awarded to Cummins, Navistar and Daimler Trucks North America, while Volvo Group joined the program some 18 months later. Program costs are estimated at $270 million in total, made up of DOE grants and matched funding from the manufacturers.

The “Supertruck” program, as it has become known, encompasses aerodynamics, weight and rolling resistance, advanced transmissions and electronic controls for optimization as well as engine improvements. Three years on, not only has the 50% improvement been shown to be within reach but many of the technologies are expected to be production-viable for the next generation of trucks.

The engine building block for this objective translated into an improvement of around 20%. Interestingly, in the same period, a target brake thermal efficiency of 55% has now become the market benchmark for future heavy-duty diesels in Europe as well as North America.

To quote a recent Cummins press release, research to this end has focused on “numerous changes in the combustion system as well as advances to reduce internal friction and so-called 'parasitic power' – excess power the engine needs to run such things as lube and coolant pumps and air compressors.”

Concentric, a specialist in the design and manufacture of lube and cooling pumps for commercial diesels, has been developing its variable flow technology for 10 years now and in the last three years has been working with most of the participants in the DOE program and their European counterparts. The company has been able to demonstrate various levels of technology to address all drive cycle options, whether by improved efficiency of conventional pumps, or by single-stage hydraulic through to electronically-controlled infinitely variable pumps offering the maximum potential for power savings.

David Woolley, President and CEO of Concentric AB comments, “We are extremely proud to be involved so widely across the Supertruck program and of the contribution that our technology has been able to make. Our products have clearly demonstrated the real potential for parasitic power saving. Moreover, as the industry has become aligned in pursuit of the fully-mapped lube and cooling strategies that these technologies enable, Concentric's products been validated to a level of durability expected by the heavy truck market. They are indeed ready for the trucks of tomorrow!”