Liebherr's LTR 1060 is designed to offer the advantages of both a telescopic and a crawler crane. 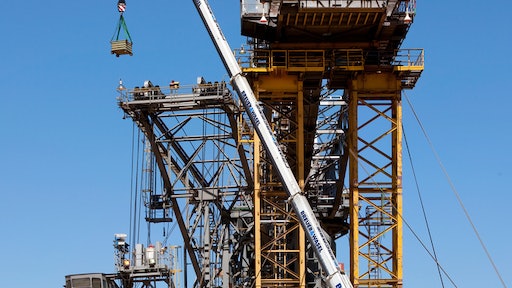 At MINExpo 2012, Liebherr presented the telescopic crawler crane LTR 1060 as a typical machine for most efficient support activities in mining operations.

With its 131 ft. (40 m) telescopic boom this 70-ton crane goes beyond the telescopic crawler cranes currently available in this size class both with regard to load capacity as well as its boom length. In addition to this, the telescopic boom can be extended with a double swing-away jib from 31 ft. to 52 ft. (9.5 m to 16 m) in length, which enables heights under hook of up to 179 ft. (54.5 m), and reaches of up to 164 ft. (48 m) can be achieved. The boom technology and the crane control system of the LTR 1060, which has been optimized accordingly, now offer the possibility of telescoping heavy loads, something which is basically not possible with lattice mast booms.

The new LTR 1060 combines the advantages of a telescopic crane with those of a crawler crane. The crawler travel gear provides excellent off-road capability, with good maneuvrability at the same time. As well as this, the full load can be moved with the crane. The advantages of the telescopic crane are short set-up times, easier transport, and the variability of the boom system. The telescopic boom is fully automatic, and can be extended rapidly to the desired length, and because the crawler crane does not need to be supported it can be moved around swiftly on the site and is ready to go into action again immediately.

Before introducing the LTR 1060, Liebherr already had two larger models in this series successfully established on the market, the 100-tonner LTR 1100 and the LTR 11200 large crane, which can lift up to 1,200 tonnes.

The structural design of the 60-tonne telescopic crawler crane allows for particularly economical transport. Complete with slew superstructure and central ballast, the LTR 1060 weighs only 138,000 lbs. (62.6 t). Axle loads, with three-axle tractor units and five-axle low-loaders, remain less than 26,500 lbs. (12 t), and if six-axle low-loaders and tractor units with four axles are used, axle weights can even be reduced to less than 22,050 lbs. (10 t). During transport the crawler travel gear is telescoped in to 9.8 ft. (3 m), and, thanks to the low crane height of 10.3 ft. (3.15 m), economical standard low-loaders can be used.

By removing the ballast, the transport weight can be reduced even further to the service weight of the basic machine, 82,675 lbs. (37.5 t). On site, both the central ballast and the slewing platform ballast can be positioned by self-assembly, without the need for an auxiliary crane. A hydraulic ballast device is available as an option.

Thanks to its structure and design, the new LTR 1060 crawler crane is ideally suited for the assembly of prefabricated components. With an erection jib 8.2 ft. (2.5 m) long and the second hoist gear, assembly operations can be carried out in two-hook operation. The load taken off the low-loader with the erection jib is transferred to the second hook on the telescopic boom, which means that prefabricated components can then be swung into the correct position and moved to the assembly location with the crawler travel gear.