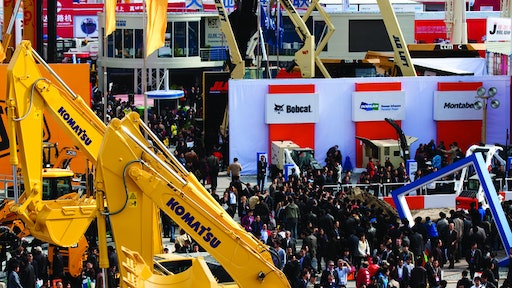 The Chinese domestic market is huge, which is why so many foreign manufacturers are building factories there. It is larger than the rest of the world combined for most product categories. For example, in 2010 the U.S. and European wheel loader markets combined were approximately 20,000 units. In the chart, the noted estimate for the Chinese market is nine times that figure.

The world, especially the industrialized world, has quickly become dependent on China to get out of the current economic malaise. World stock markets are reacting daily to Chinese government policy change news. China’s economy is on track to grow close to 9% this year. The country was the biggest supplier of goods to the developed world in 2010. The Chinese government is on a spending spree that is benefitting the economies of countries around the world. It has accumulated massive amounts of U.S. dollars and is just beginning to spend them.

However, the massive country is dependent on outsiders for a considerable amount of its food, steel, oil, coal and most other commodities. Although the country has the largest population in the world and is about the same area as the U.S., three quarters of the land area is not arable, and mineral commodities lie in remote northern regions where there is inadequate transportation to bring them to markets in the south.

The government is in a rush to industrialize the country. The ruling establishment understands it is in a balancing act, keeping tight control of its citizens while moving the country to a market economy--the only way it can efficiently get goods and services to its people. Eight hundred million farmers are being encouraged to move to the cities and man the industrial factories that are sprouting up in suburbs and industrial parks all over.

China’s ten-year stimulus program is targeted at linking its major cities with high speed rail in order to handle all the people moving into the urban centers. The larger cities are also getting subways; the total cost will be $600 to $700 billion. This massive investment is equivalent to the total amount of money spent by the U.S. government to stimulate the entire U.S. economy. These investments will generate demand for imported sophisticated products that China is not yet capable of producing.

The move into the cities is putting tremendous pressure on housing prices. The government has put controls on home prices to slow the increases. Housing price pressure is exacerbated by monetary controls. Individuals are permitted to take very limited amounts of money out of the country, and the government is just beginning to allow companies and governments to trade its currency. Individual investment opportunities for the average Chinese citizen are limited to those within the country. This is leading to a speculative bubble.

The government is trying to slowly let the air out of the housing bubble without disrupting the market too much by instituting price controls and limiting lending for new projects. As a result home prices in 2011 are expected to drop 20% to 30%. Anticipation of the housing decline affected equipment sales in the last half of 2010. The tight currency controls and refusal to change its exchange rate are causing food prices to increase. China’s October food price index increased more than 60% compared with October of 2009.

The booming Chinese market is providing opportunities for companies that are presently operating there, for companies contemplating investments in the country and for companies that are just getting started importing their products there. Companies already in China are benefiting from the local market growth. Many are also using their Chinese facilities to build products for export. Labor costs are still low there compared with most industrial economies. Importing products to China can be challenging, however. Finding a partner who knows the market is the best way to break into the market. The only downside to investing in China, at the moment, is repatriation of profits due to currency controls. There is also risk of having a unique technology copied as intellectual property law enforcement can be problematic.

The long term question is: can the Chinese government sustain the extraordinary growth of the past 10 years?

Bauma China 2010, held in Shanghai, China, from November 23 to 26, broke records for exhibition space sold, the number of exhibitors and number of visitors. More than 150,000 visitors from 165 countries attended this year’s bauma China, compared with the last bauma China held in 2008 with 112,674 visitors from 124 countries, an increase of 33%. After China, the top ten countries and regions of origin among the visitors were Korea, India, Japan, Russia, Malaysia, Brazil, Singapore, Thailand, Indonesia and Australia – in that order.

The next bauma China will take place in Shanghai from November 27 to 30, 2012. It is expected that there will be a considerably larger North American presence in 2012, as the Thanksgiving holiday will be the prior week. For the past several shows, the traditional American holiday has been the same week and prevented quite a few North American people from attending the China show.