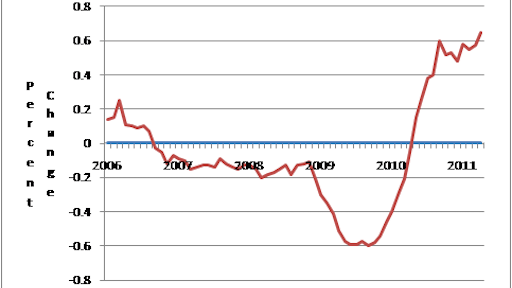 There is reason to believe that the earthmoving equipment recovery is real. Because of the size of its revenues compared with the total U.S. industry, Ed Rapp, one of Caterpillar’s Group Presidents and its CFO, claims Cat’s economists have found their company revenues to be a good leading indicator of the entire U.S. economy.

Caterpillar calculates a three month rolling average of their worldwide dealer retail sales and publishes the monthly reports. The latest is April 2011 when Caterpillar’s North American retail sales were up 65%.

If Caterpillar’s sales are a leading indicator for the U.S. economy, then we are in for a strong uptick for the balance of 2011. It is interesting to note that Caterpillar management knew in late 2006 that the economy was faltering and that it was truly damaged by late 2008.

Other equipment manufacturers besides Caterpillar reported strong first quarter 2011 swings in their construction equipment business as well. Deere was up 65%; CNH was up 19%; and Volvo was up 14%.

So, why is the earthmoving equipment market this strong when the underlying economic indicators are not – housing starts, non-residential construction and heavy construction are all either down or flat compared with a year ago?

According to several equipment distributors, during the recession all of the manufacturers and their dealers drew down inventories to an unusually low level. The level was right for the amount of sales they had, but there was no inventory cushion in case the economy recovered, which it has.

In addition, equipment owners sold off huge amounts of their fleets. As some may recall, all of the equipment auction companies were reporting higher than normal selling activity. Also included in the “equipment ownership group” are the national rental companies such as Hertz, RSC and United. They too reduced their fleets by hundreds of millions of dollars and thousands of units. In fact, they shed huge quantities of access equipment such as aerial platforms.

The current situation: the cupboard is bare. The U.S. machine population is still severely depleted.

One manufacturer is seeing its customers with projects buying new equipment because they no longer own the right equipment for jobs; or, now that manufacturers have some work, albeit small jobs, they have to replace older units in their fleet

There are pockets of strength in markets such as energy and mineral commodities. Drilling for natural gas fracking is at an all time high, and owners of mines with metallic minerals are benefiting from high commodity prices. Current demand has strengthened due to inventory rebuilding at distributors and rental companies, due to equipment owners buying new to replace old machines and due to new demand from market sectors such as energy and commodities.

The issue going forward is how sustainable is the current level of demand? There is a nagging feeling that the reported growth rates will come down sometime in the third quarter. Markets will continue to grow, but at slower rates than what we are seeing currently.

I think my earlier estimate for a 15% annual growth rate from 2010 to 2011 is accurate unless there is a miraculous turnaround in the housing market, and I don’t think there will be.