Confidence in the U.S. economy drops significantly among manufacturers

Manufacturers's confidence in US economy plummets 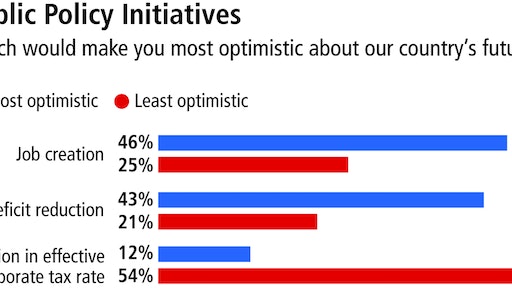 With so much uncertainty in the global markets, it is not surprising that a recent survey conducted by Grant Thornton LLP found that U.S. manufacturing leaders are extremely pessimistic about the domestic economy.

Manufacturing has been one of the few bright spots in the economy since the end of the recession, generating more than 300,000 new jobs since December 2009, according to the National Assn. of Manufacturers (NAM). Strong export growth in 2010 and the first half of 2011 helped increase revenues and create jobs. However, the slowing global economy, coupled with a lack of confidence in economic policy, has caused senior manufacturing executives to turn cautious, particularly because these are matters they can’t control.

Grant Thornton speaks regularly to manufacturers across the country, and most say they are focused on matters that they can control, with their top three priorities being:

In addition to having a more negative outlook on the economy, manufacturers were pessimistic about jobs. Only 21% said that their company plans to increase hiring in the next six months, down from 44% in May, while  the number of those that plan layoffs in the coming months increased to 35% from 16% in May.

These findings indicate that business leaders in manufacturing are taking  a macro view--instead of just focusing on what would be beneficial to them or their companies. It’s clear they think that what’s good for the largest number of people is what will boost the economy in the long run.

Visit www.GrantThornton.com/BOI for all the past survey information.

Wally Gruenes is Grant Thornton LLP’s National Consumer and Industrial Products Managing Partner and the firm’s National Manufacturing Practice Leader. Based in Dallas, Wally is a board member of the National Association of Manufacturers. He can be contacted at: 214 561 2640 or wally.gruenes@us.gt.com.