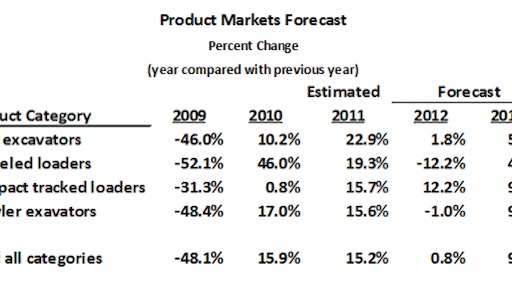 This has been one of the most challenging updates to the Market Forecast due to the changing market conditions that have spread through Europe. The Greek economy was one of the fastest growing markets in the Eurozone from 2000 to 2007; GDP grew at an annual rate of 4.2% during this period.

However, GDP growth came to an abrupt halt in early 2010 after the country borrowed large amounts from other EU government banks. It was later determined that the Greek government was not accurately reporting the country’s official economic situation. In April 2010, Greece’s debt rating was downgraded by Standard & Poors to the upper levels of junk status. Since that time the whole Euro-based currency system has come under scrutiny. The so-called “European Debt Crisis” has unsettled companies in the entire region and caused them to reduce expectations for 2012. Forecasting in this environment is extremely difficult.

There are four principal threats to the world economy: volatile energy and commodity prices, financial market liquidity, global trade imbalances, protectionism and the deep and prolonged global recession it could provoke.

Western European economic growth has been much slower than the rest of the developed countries and far slower then growth in the developing world. The Euro, as a currency, eventually could be undone.  The concern that surrounds Greece’s public debt has now spilled over to other countries in the Euro zone such as Ireland, Portugal, Spain and Italy. The coordinated actions taken by the world’s central banks to assure bank liquidity are reassuring to the world’s stock markets, however, there is still considerable uncertainty over whether the EU countries can come together and coordinate their fiscal spending policies.

When the EU banking system was formed there was no central control over fiscal policy put in place. So, for example, Greece could borrow from 10 different countries because no one was keeping track of who they owed money to. Only Greece knew the extent of its loans. It was possible for Greece to have a very expansive spending policy (which it apparently did) and Germany to have a very austere policy. In the past when each country had their own currency (the lira, the D-mark, the Franc) currency markets kept score over which country was the strongest and which was not by buying or selling those currencies. The policy differences were reflected in the various currency values. With one currency, the Euro, for 27 countries, all with their own fiscal policy agenda, there is no way for the world to put a value on those policy differences except by buying or not buying the country’s bonds. This scheme is no longer working.

In 2009 all product markets declined. The Western European market for construction equipment declined by 48.1% compared with 2008, the sharpest one year fall in the past sixty plus years. Recovery began in 2010 and the markets improved by 15.9% to reach 89,000 units, slightly less than half of the market peak that was reached in 2007. In 2010, the performance of the individual product categories ranged from a decline of 1.9% for backhoe loaders to an increase of 22.9% for mini-excavators. We are forecasting that overall product markets will grow slightly in 2012 compared with 2011, up 0.8%. We believe the 2013 market will increase 9% to a total of 115,800 units, a level that is similar to that reached in the early 2000s.