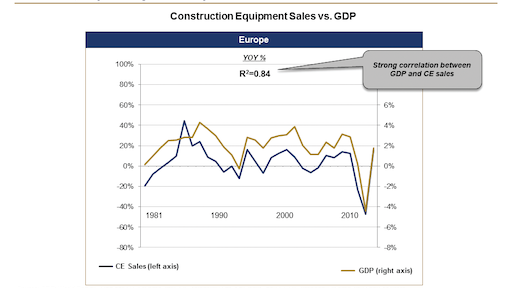 Europe’s economic downfall and uncertain recovery timeline are under constant evaluation by heavy equipment manufacturers. There are a number of economic indicators that can be tracked to help diagnose the state of the construction market.  Correlations between those indicators and construction equipment sales can then be drawn to better forecast market performance, according to Francesco Barosi, Managing Director at AlixPartners LLP, New York, NY, and global lead of the firm’s Heavy Equipment Practice.

Considering the period between 1981 and 2011, the gross domestic product (GDP) in Europe has held a relatively consistent correlation to construction equipment sales. “Simply stated, these lines run almost in parallel, with a high correlation coefficient of 85%” says Barosi. “That strong connection to GDP acts as both an indicator in the moment, as well as a future forecast for the European construction equipment market.”

European GDP growth in 2013 is forecasted to be a marginal increase from the current near-zero growth. “This is a clear reflection of the state of the market with low growth and low expectation of year over year growth in the near future” continues Barosi.

“World GDP growth was essentially stable at 3 to 4% between 2003 and 2007, while the European growth was running approximately 200 base points lower. We observed the impact of the world recession in 2009 when we had retraction of the world economies by 2.2%. The recovery has been slow, especially in Europe, where growth in the Old World is expected to be between 0.3 and 0.4%” says Barosi.

Other key indicators that OEMs should monitor include the level of government expenditures, and private and public investments. In Europe, Eurostat—the statistical office of the European Union (EU)—publishes regional data which enable comparisons at the European level between countries and regions.  “If you look across the big regions like North America, Latin America and Asia-Pacific, you do not find infrastructure spends and government investment changing so drastically. What you find differs is the order of magnitude and its impact on GDP—and that impact is much higher in Europe where Government Spend accounts for 40% of GDP,” Barosi says.

Low interest rates offset by low amounts of credit available to borrowers affect the housing market. While there are a number of unique policies at individual country levels such as France’s recent loi scellier tax incentives for economical housing, the credit crunch continues to affect private investment for housing starts across the entire continent.

“When compared to other regions, Europe is a much more predictable market with significantly lower year over year growth expectations,” Barosi says. “In emerging economies such as China, population growth, food needs and infrastructure development drive economic growth.  The European countries are quite different; they are already developed and have limited space. At this point, the construction market in Europe is about renewal—improving the current infrastructure, not developing one.”  Compounding this situation, investment in European infrastructure is well below historical levels seen in the mid-2000’s.

The projected compound average growth rate (CAGR) for heavy equipment sales in Europe from 2012* to 2016 is 1%.  Larger economies like Germany, France and the U.K. are expected to see sales drop between 0.1% and 0.4%, while other European countries (e.g., Eastern Europe) are expected to have slow growth.  “The traditional larger developed economies are stable yet flat, while the non-traditional economies that are not typically monitored closely for GDP influence are growing at a low rate. If they were growing at 15 or 20% that may be worth mentioning, however comparatively their expected growth in low single digital is almost negligible,” explains Barosi.

So what can help Europe? Still on the table is relaxing the credit crunch. Unfortunately, many financial institutions are carrying a lot of debt causing their risk management policies to impact credit availability, “unless they develop a European-wide entity to provide funds,” suggests Barosi, “but that idea is far off.”

Mini-excavators, excavators and loaders account for the majority of the heavy equipment sales in Europe and will basically follow the same overall sales forecast. “One of the options in Europe that we’ve seen is OEMs starting to leverage and focus on the rental market,” Barosi says. “European OEMs are developing joint ventures and partnerships with a distribution model that is almost similar to an automotive model where not only commercial entities but also individual end-users, can rent equipment. There has been a large focus on developing those capabilities and the infrastructure to support them in the last 12 months.”

Looking beyond construction equipment, the current slow growth of the commercial vehicle segment in Europe was predicted back in September of 2012 when AlixPartners released its annual AlixPartners Global Commercial-Vehicle Industry Outlook (read more, 10884269).

The report projected a slump in sales of commercial vehicles globally and increased pressure on the industry to consolidate. The long term analysis of the industry sees only those manufacturers who can capitalize on economies of scale succeeding in the cost-driven market. “[Cost] reductions can be achieved through worldwide economies of scale in products and in sourcing, including by adopting modular strategies and  using optimized processes in cooperation with suppliers,” the press release states.

The study anticipated that 2012 commercial vehicle sales in Western Europe would decline 15 to 20% as compared to 2011 sales, with projected 2008 sales levels being achieved only by 2015 at the earliest.

According to the study, despite rising globalization, big manufacturers still must meet an increasing variety of regional standards and client requirements. Differences in regional requirements range from emissions and safety requirements to duty cycle elements such as distance, road quality, hours of usage and maintenance routines.

“In order to meet this high degree of complexity with minimum costs, parts standardization and modular design are necessary,” says Barosi. “The commercial vehicles of the future will be based on common modular strategies for all local and specific sector variants, which can be assembled on a ‘variant-flexible’ local assembly line.”

Unlike the situation in some emerging markets, local European brands do not have state support to help them defend share or expand. “It’s very difficult to penetrate the construction market and expand market share. The opportunity really is to optimize equipment design internally,” explains Barosi. “Europe is currently a market in the process of stabilization, and large [construction] equipment manufacturers are restructuring in the sense that they are reducing their overall equipment footprint, consolidating production assembly lines and finding common platforms to reduce internal manufacturing costs.” The rental dynamic helps construction equipment OEMs to find another revenue outlet without developing inventories of unsold equipment.

AlixPartners predicts that commercial-vehicle assembly from the chassis through electronics, as well as production processes, will be modularized and standardized worldwide. Evaluations by the firm experts show that by doing this, OEMs could reduce 20% of production costs and 30% of development costs.

The study also predicts that value commercial vehicles—those currently being built by local companies in developing countries—will for some time have major cost advantages over Western commercial vehicles, even those built in developing countries.  “Value commercial vehicles will have an impact on the market in Europe and on the U.S. as well,” says Barosi. “The opportunities for Europe lay within the company itself. They aren’t transformational or revolutionary. For construction, it’s going back to basics and focusing on the major product lines and perhaps removing low volume specialty equipment,” Barosi continues.

A better-leveraged relationship with local suppliers instead of vertical technology integration is a potential opportunity for manufacturers to find internal cost reductions. Greater transparency across the value chain could optimize joint planning and the steering of capacities, risks and costs. According to AlixPartners, Tier 1 suppliers are often not ready to take on the responsibility for a complete parts system, but OEMs often also don’t want to relinquish the responsibility.

Just as was said of the U.S., the European economy will come to terms with and establish a new normal. Streamlining processes and adopting modular strategies are ways for European equipment manufacturers of construction equipment and commercial vehicles to survive a slow growth economy, while reducing product lines can benefit OEMs in the suffering European construction equipment market specifically. A close eye on GDP and government investments will help OEMs better define production and sales strategies, but it will take several years before the European market returns to strong growth.

*Numbers for 2012 are still being compiled

GDP is a key demand driver for Construction Equipment in developed markets, especially in Europe, with a correlation of 0.85

Overall CE industry sales are expected to drop from 247k units in 2011 to 239k units in 2012 (final numbers still not reported by OEMs), with moderate growth of 1.0% in the next few years.

In order to cope with sales slow down, OEMs are aggressively looking at rental capabilities as an area for growth, right sizing operations for lower production or expanding in new markets/products

There are several indicators that OEMs should monitor

Surge in Use of Mobile Robotics to Propel Market

What is it like to live and work during this COVID-19 crisis? How is it affecting businesses big and small? What should future workers understand about this time? Share your Story of Strength with us.
ACBM Editorial Staff
March 30, 2020

ASV's Posi-Track loaders are now available in base- and premium-level configurations to offer more options to customers.
ASV LLC
March 20, 2020

An impact on construction is likely, but duration is unclear.
March 20, 2020

AEM says registrations for CONEXPO 2020 were over 130,000 and that it was one of the best editions of the show.
Association of Equipment Manufacturers (AEM)
March 18, 2020

A new Wells Fargo survey shows the construction industry is somewhere between cautiously optimism and strongly optimistic, which is common during an election year.
March 17, 2020