A first look at the equipment markets in 2014

So far, 2013 has been a tough year for construction machinery manufacturers. 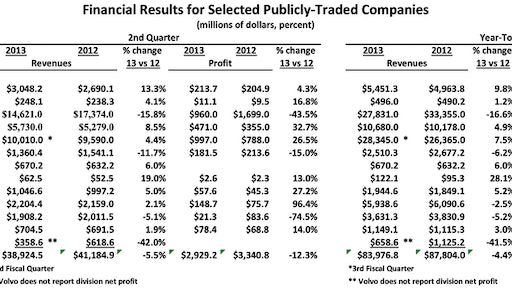 Overall second quarter revenues were down approximately 5%. Profits were down more than 12%. And it is distributors’ surplus inventories which seem to be the problem. They have been reducing their inventories throughout 2013. Companies like Caterpillar expect that their distributors will continue to reduce inventories for the balance of 2013. Dealers will rely on the manufacturers they represent to stock the machines they need when they need them, essentially removing the burden of inventory from their balance sheets.

In total, the publicly owned distributors I follow had year-to-date gains of about 1% and profit gains of 2%. During 2012 distributors loaded up on new equipment in their rental fleets called “dealer operated rental yards,” or DORYs for short. This year they are not buying as many machines for their fleets. Manufacturers’ sales to DORYs are down 5 to 15% depending on the product category. However, sales to non-rental customers are up as much as 10%. The expectation is that the 2013 market will be up a net 5% or so.

One manufacturer told me that if 2013 ends flat compared with 2012 he will consider it a good year. Let’s be optimistic and assume that the 2013 market ends up about 5%. That will help get 2014 off to a good start. I think that the overall market will be up slightly less than 7%. In unit sales terms the market should approach the same level as in 2008. It has taken five years for the market to get back to “normal.”

The 2014 machinery market can be expected to benefit from gains in U.S. housing starts and an improved non-residential construction market. Most housing experts forecast that housing starts will increase and go over the one million unit mark threshold, a level we have not seen since 2007. I believe 2014 starts will come in at about 1.1 million units from 2013 that will end at approximately 900,000 units, an impressive gain of 22%. However, the really impressive part of the housing start recovery is that the market will rotate from rapid growth of multifamily units to more rapid growth of the single family homes. Single family housing starts drive much more equipment demand than the multifamily housing market because they attract a lot of collateral construction for sewer and water lines, electric utilities, schools, shopping centers, hospitals, etc. and are very important to the construction materials market as well.

Non-residential construction will also be a demand driver in 2014 with an expected gain of about 12% compared with 2013. The gains will come as people who own businesses and companies begin to feel more confident in the economy and expand their facilities after a long period of little to no investment.

Energy related equipment sales are expected to remain at a high level. Mining oil shale (fracking) will continue to benefit the same regions of the country as in the past couple of years. Fracking is very equipment intensive.

Mineral mining did not have a good year in 2013. Coal mining especially has been hard hit due to an abundance of natural gas that has induced electric utilities to switch from coal and from an anti-coal attitude by the current Washington administration, especially the Environmental Protection Agency. Iron production has been adversely impacted by drops in prices that have made many mines in the U.S. unprofitable to operate due to declining demand, particularly declines in demand from China. Copper prices have held steady, albeit at a lower level than a few years ago. It is one of the few bright spots in the mining picture. I don’t believe there will be much change in the mining outlook during 2014. Most of the mining equipment manufacturers have scaled back production and reduced their shareholder expectations about revenue growth and profits.

My forecast calls for a gain in retail sales of construction machinery of slightly less than 7%. I believe we will see the largest sales gains for articulated haulers (up 15.4%), cranes (up 12%), skid steer loaders and rubber tracked loaders (up 9.7% and 9.9% respectively), and hydraulic excavators (up 7.9%).

The rental companies have had a phenomenal year so far in 2013. Topping the list of reasons 2013 has been so good for them is the economic uncertainty that caused equipment users to rent equipment rather than buy it. I also believe users’ concern and confusion about the new Tier 4 Interim products that were introduced to the market starting in early 2012 contributed to the growth. Many of the national rental companies stocked up on as many Tier 3 products as they could find including used machines to put off the inevitable day when they would have to buy Tier 4 units for their fleets. All of these reasons have contributed to more and more new equipment going into the rental fleets of both the national rental companies and authorized distributors for the equipment manufacturers who have amassed huge rental fleets.

It seems that the closer a company is to the equipment user the better the chance for profits.

Read more about Frank Manfredi’s analysis of the correlation between profit and closeness to the user at 11116538.

A Q2 analysis of manufacturers, dealers and rental companies for 2013