Get a fracking clue!

The fracking industry is under fire (pun intended) for its potential harm to drinking water and combustibility. 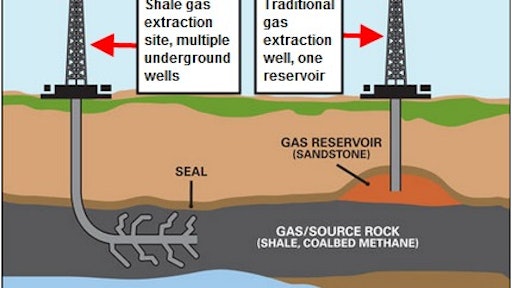 *For more information on the fracking industry, browse this compilation of news and articles.

There has been a lot of press lately on the fracking industry, both as a thriving market for component manufacturers as well as a danger to people close to drill zones.

Most recently, filmmaker Josh Fox of the fracking movie Gasland (view the trailer here) was arrested during a review of an EPA report claiming fracking had most likely been the cause of contaminated drinking water in Wyoming.

Read more on his arrest here.

People magazine even featured a small article in its February 6, 2012 issue entitled "Living with 'Fracking': Where the water catches fire" profiling a family in Wyoming with contaminated drinking water. A Bloomberg Businessweek article (in its Nov. 7-13, 2011 issue) by Paul M. Barrett, "The underground solution: Vast unlocked reserves of shale gas could reignite the U.S. economy" showcases the economic benefits found with natural gas.

One industry member sent me the summary of the Energy Policy Act of 2005 and mentioned specifically Section #322 on fracking. Here is the Act to read for yourself, http://doi.net/iepa/EnergyPolicyActof2005.pdf (page 102 Subtitle C—Production).

I'm compiled a slew of recent news, tweets, videos and websites related to the fracking debockle to try and offer a nice balance of information, both pro-fracking and anti-fracking.

Where do you stand on fracking?