CECE’s main request is to give Europe’s manufacturing industry the means to increase the share of industry in the European GDP to 20% by 2020. 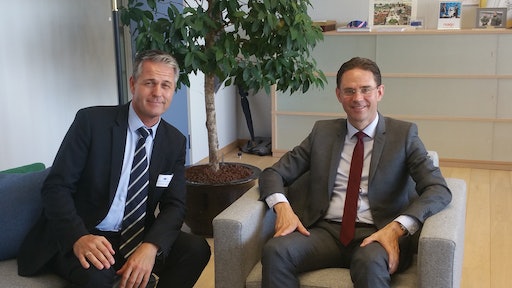 To help safeguard the competitiveness of the European industrial base, to create jobs and to instill new sustainable economic growth in Europe, the European manufacturing industry is requesting a holistic industrial policy strategy and action plan at EU level. In today’s meeting with Commission Vice-President Jyrki Katainen in Brussels, CECE President Bernd Holz emphasized to him how vital a coherent industrial policy could be for the future of construction equipment manufacturing in Europe. Amongst the relevant points Bernd Holz highlighted market surveillance, international trade and regulatory compliance. Vice-President Katainen confirmed Commission’s willingness and commitment to support EU industrial competitiveness and looks forward to receiving further input on policy measures and initiatives. Concluding the exchange Bernd Holz said, “I really appreciate the interest and the hands-on approach of Commissioner Katainen. I confirmed to him CECE’s readiness to deliver concrete examples of burdensome regulation, as well as new initiatives that we can put in place to reach the goal of 20% of EU GDP by industry.”

It is no secret that in the European Commission the initiative is an issue of controversy. Unanimous support, however, comes from the Member States expressed by the Competitiveness Council and endorsed by the Council Summit and from several MEPs from all political groups in the European Parliament. CECE is indeed contributing input to the upcoming Parliament resolution calling on the Commission to propose the industrial policy strategy, to be adopted at its next plenary session on July 5.

CECE’s main request is to give Europe’s manufacturing industry the means to increase the share of industry in the European GDP to 20% by 2020. The major fields of action defined include issues like reducing the administrative burden of complying with EU legislation, ensuring fair competition through better market surveillance, seeking greater international policy alignment to avoid technical barriers to trade, access to finance, digitization and new business models or investment in skills and talents. 128 European trade associations of the European manufacturing industry including CECE recently issued a Joint Declaration backing this request.

The European manufacturing sector which employs over 34 million people across all member states in supply chains comprising hundreds of thousands of SMEs and larger suppliers, is facing considerable challenges.  Between 2000 and 2014, the share of manufacturing in total EU output fell from 18.8% to 15.3% while 3.5 million manufacturing jobs were lost between 2008 and 2014. In this context and with other countries around the world putting industry at the very top of their political agenda, it is vital for the EU to set the right framework for Europe’s manufacturing sector to grow, be competitive and create jobs in Europe, says the industry. The European Manufacturing Industry has a huge capacity for research and innovation, boasts a skilled workforce and has earned a global reputation for quality and sustainability. It now needs the support of the European institutions and member states to develop its full potential.