LiuGong recently celebrated the fact it has now sold over 350,000 wheel loaders worldwide. 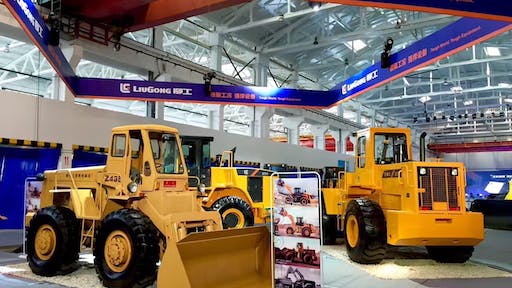 On May 26, 2017, LiuGong celebrated selling over 350,000 wheel loaders worldwide. More than 300 people including representatives from the government and industry associates, founding members of LiuGong, customers of LiuGong’s first generation products, dealers, partners, key accounts and media attended the ceremony to witness the historical moment.

LiuGong is the manufacturer of the first modernized wheel loader in China and the first company that produced plateau type wheel loaders in the world, as well as the producer of China’s largest wheel loader, the 8128H.Qi Jun, President of the China Construction Machinery Industry Association, commented that LiuGong has been “integral in China’s modernization and infrastructure development.”

LiuGong manufactured its first wheel loader, the Z435, in 1966, which was also the first certified modern wheel loader in China. The ZL50C was LiuGong’s key product for the following 30 years and was the first Chinese made wheel loader that was exported in large volumes to overseas markets. “We have had our oldest wheel loader, a 50C, for more than 30 years and it is still working,” shared one customer at the event.

Now the 856, the plateau type wheel loader ZLG50G, 856H and 8128H are the representative products of LiuGong’s third and fourth generation of wheel loaders and at the end of 2016, LiuGong launched the revolutionary vertical lift wheel loader, the VL70A. The new technology marks an important milestone for LiuGong and for the Chinese construction equipment industry.

“350,000 is only a start for LiuGong,” said Wang Ruixiang, President of China Machinery Industry Federation. He also encouraged LiuGong to write a new chapter in China’s CE industry.