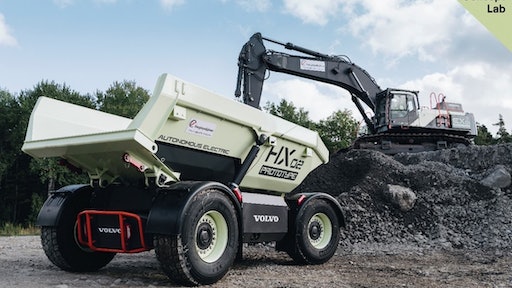 In line with the theme ‘Building Tomorrow’, Volvo Construction Equipment (Volvo CE) will highlight its commitment to driving technological innovation when it presents the Electric Site research project and the ZEUX autonomous concept wheel loader at bauma China 2018.

The future is electric

Since the end of August, Volvo CE and its customer Skanska have been testing the viability of the Electric Site research project at Skanska’s Vikan Kross quarry, near Gothenburg, Sweden. The project aims to transform the quarry and aggregates industry by reducing carbon emissions by up to 95% and total cost of ownership by up to 25%. It aims to electrify each transport stage in a quarry – from excavation to primary crushing, and transport to secondary crushing – although a negligible amount of diesel power will still be used.

At this stage, the machines and technology involved in the electric site solution are part of a research project and are not commercially available.

“The electric site research project is a step towards transforming the quarry and aggregates industry,” says Uwe Müller, Volvo CE’s Chief Project Manager for the Electric Site project. “By using electricity instead of diesel to power construction equipment in a quarry, we have the potential to deliver significant reductions in fuel consumption, CO2 emissions, environmental impact and cost-per-ton. We are combining intelligent machines, automation and electromobility as a door opener to developing completely new solutions to meet customer needs. The electrification of construction equipment will produce cleaner, quieter and more efficient machines – this represents the future of our industry.”

Innovating for the future

The Electric Site prototype machines won’t be the only futuristic concepts discussed at bauma China 2018. Visitors to the show will also get the chance to see ZEUX – the futuristic, autonomous concept wheel loader model. The concept model was created by Volvo CE in collaboration with LEGO® Technic and a group of children. This collaboration made it possible to test ideas for new types of construction machines, both in terms of functionality, scale, design and interaction – and to bring a more human aspect to the artificial intelligence in big construction machines.

ZEUX is fully electric and autonomous. Its 150 kWh battery allows it to operate 3-5 hours before needing to be recharged. The ZEUX drone hovers above the wheel loader, enabling it to be aware of its surroundings. This is combined with the ‘Eye’, which can track moving and still objects, making the interaction between humans and machines as safe and intuitive as possible. The frame of ZEUX can be lowered or raised as needed. As such, it can balance and take on the optimal position and angle for the task at hand. Therefore, ZEUX can reach much higher than a conventional machine.

Although ZEUX is only a concept model and is not commercially available as a construction machine, it is considered to be a glimpse into the future of the industry. The ZEUX LEGO Technic building kit is available to purchase in all markets.