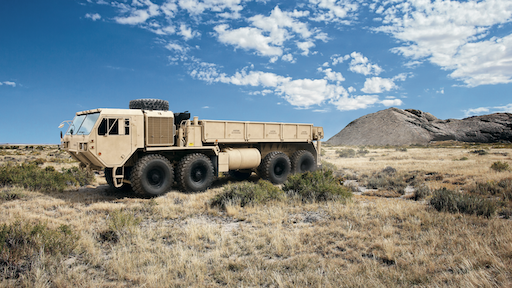 Oshkosh Defense LLC, an Oshkosh Corporation company, announces that it has been awarded a $232.7 million delivery order from the U.S. Army Tank-Automotive and Armaments Command (TACOM) to recapitalize vehicles in the Army’s Family of Heavy Tactical Vehicles (FHTV) fleet.

The HEMTT and PLS have been in the Army’s fleet since 1981 and 1990 respectively, and Oshkosh has been performing recapitalization services on these vehicles since 1995.

“As the backbone of the U.S. Army’s resupply and distribution system, the HEMTT and PLS vehicles are heavily relied on to carry munitions and other critical supplies across all types of terrains and in all types of environments,” says Pat Williams, Vice President and General Manager of U.S. Army and Marine Corps Programs for Oshkosh Defense. “We are proud that the U.S. Army has trusted Oshkosh to provide this cost-effective recapitalization service for over 2 decades,” Williams continued. “As the original equipment manufacturer, we know these vehicles inside and out, and we are in the best position to quickly return them to field operations in like-new condition.”

Allison will provide its X200 transmissions for use in the U.S. Army's M113 Armored Personnel Carrier family of vehicles.
Allison Transmission
December 5, 2019

The Army selected the Grove GMK4060HC cranes for their high capacity, strong load chart at long radii and the long reach of the MEGAFORM boom.
The Manitowoc Company, Inc.
October 24, 2019

Oshkosh Defense will exhibit for the first time a JLTV with Black Hornet Vehicle Reconnaissance System and a two-door Utility JLTV with the Uvision Hero-120 Tactical System.
Oshkosh Corporation
September 17, 2019

Oshkosh says there has been growing global interest in its JLTV design.
Oshkosh Corporation
September 10, 2019

Oshkosh will partner with Flyer Defense to develop the lightweight all-terrain vehicle which is capable of carrying up to nine troops and associated combat equipment.
Oshkosh Corporation
August 23, 2019

Mack Defense was recognized for its export sales growth of 50% and the customization it offers for export markets.
Mack Trucks Inc.
June 17, 2019

The contract award is in response to the need for a semitrailer that can deliver increased payload capability while gaining European road permissions.
Oshkosh Corporation
May 30, 2019

Benefits of the JLTV to the international community include fleet commonality among coalition forces as well as a vehicle that has already undergone rigorous U.S. Army and Marine Corps testing.
Oshkosh Corporation
May 29, 2019

The JLTV will be outfitted with the Kongsberg Common Remotely Operated Weapon Station and .50 Caliber Machine Gun to demonstrate its ability to carry a multitude of lethal weapons without sacrificing speed.
Oshkosh Corporation
May 21, 2019

Mack Defense engineers have optimized the M917A3 HDT to meet the current needs of the U.S. Army, while allowing for evolving requirements and future growth.
Mack Trucks Inc.
February 18, 2019