Goodyear and Local Motors are testing an airless tire on an autonomous shuttle in the field, DEUTZ forms new long-term OEM agreements, Timken's automatic lubrication business continues to grow, and more news you may have missed. 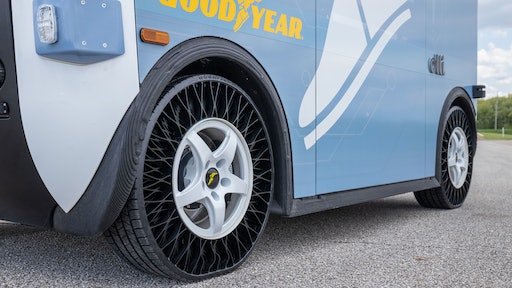 Goodyear and Local Motors are testing the airless tire in the field on an autonomous shuttle vehicle.
Goodyear

DEUTZ has announced a strategic partnership with ASKO Group, a construction and agricultural machinery OEM based in Turkey. The partnership will include delivery of engines from DEUTZ as well as the forming of a joint venture for the assembly and production of engines at ASKO's existing facilities. This will enable easier supply of engines to local customers.

"DEUTZ is a leader in state-of-the-art EU V emission compliant engine technology and offers us a product range that perfectly matches the needs of our customers. And with the DEUTZ expertise in electric motors, hydrogen engines and the use of alternative fuels, we are well prepared for our future drive train needs as well," says owner, President, and chairman of ASKO Group, Sami Konukoğlu, in DEUTZ's press release announcing the partnership.

"This partnership also strengthens our service business over the long term and provides an opportunity to drive our growth strategy forward," says Michael Wellenzohn, DEUTZ Board Member for Sales, Service and Marketing.

Additionally, the companies will look at working closer together on engine technology as well as engine installation components below 150 hp (112 kW).

"The Corona pandemic and its related impact on world commodity flows and global supply chains has reinforced the importance of strong, cooperative relationships with suppliers. DEUTZ has been a trusted partner for years and we look forward to continuing to strengthen our relationship,” says Eric Hansotia, Chairman, President and CEO of AGCO, in DEUTZ's press release announcing the partnership with AGCO.

Dana Inc. has announced plans to accelerate its efforts to reduce Scope 1 and 2 greenhouse gas (GHG) emissions by at least 50% by 2030. This is ahead of the company's original target of reducing GHG emissions by 2035.

The company aims to reduce more than 30,000 metric tons of carbon dioxide (CO2) emissions globally. In addition, Dana says it has signed a commitment letter with the Science Based Target Initiative (SBTi) to help set its emissions targets.

"The ability to significantly accelerate our emissions reduction target is a result of our team's commitment to developing new technologies, delivering innovative products, and driving operational efficiencies," said James Kamsickas, Dana chairman and CEO, in the company's press release announcing the emissions-reduction targets. "The mobility industry is positioned to not only deliver products that are designed to reduce emissions during operation, but also to manufacture vehicle systems using business practices that further advance a greener world. We believe that leading the way in sustainability is critical to supporting our customers and directly aligns with our leadership in electrification."

FEV will assist with development of the propulsion system's control strategy, and aid with integration for OEM advanced driver assistance features (ADAS) as well as controls, driver interfaces and other systems.

The Timken Co. says its automatic lubrication systems portfolio—which includes the Groeneveld and BEKA brands—has more than doubled in size in terms of revenue over the past 5 years. This was achieved through organic growth as well as strategic acquisitions.

Because of this growth, the company is anticipating 2021 will be another record year for the business. Timken continues to expand it globally, and is expecting the trend toward increased automation will aid further growth of the automatic lubrication business. The company believes this will help lead to a double-digit compound annual growth rate (CAGR) through 2025.

To help further growth, Timken is increasing production in North America and China. The Groeneveld-BEKA brand will begin assembling its new multi-line pump later in 2021 at the recently expanded North America operations in Dayton, OH. Manufacturing operations are expanding in China, as well, to meet increasing demand in the region.

The Kohler Engines manufacturing campus in Reggio Emilia, Italy, has received ISO 50001 certification. This is in addition to its ISO 9001 certification, indicating the high standards to which the company manufacturers its products.

ISO 50001 specifies requirements for energy management systems which aid with continuous improvement of energy performance. The company says this certification enables it to adopt a systematic approach to make a better use of the energy-intensive assets, address the impact, conserve resources and improve the bottom line through efficient energy management.

“Our care for the environment is not only due to our products, which are designed to achieve extremely efficient combustion, we apply it to every aspect of our work: innovative processes, modern facilities, plant management and now also excellent energy management. This project is a great example of bold innovation,” says Vincenzo Perrone, Kohler Engines President, in the company's press release announcing the certification.

Epiroc recently announced it has received a significant order for battery-electric mining equipment from a customer in South Africa. Ivanplats, a subsidiary of Canadian mining company Ivanhoe Mines, has ordered the equipment for use in its new Platreef underground mine located in South Africa.

The company has ordered several of Epiroc's Boomer M2 Battery face drill rigs as well as Scooptram ST14 Battery loaders. Ivanplats' goal is to use all battery-electric equipment for its fleet at the Platreef mine. This will help to keep workers safe and comfortable throughout the work day as there is no emissions produced by the Epiroc equipment.

In addition to providing emissions-free operation, the machinery is equipped to be automation ready and includes Epiroc's telematics technology. Epiroc expects to deliver the equipment in early 2022.

The company says it aims to offer its complete fleet of underground mining equipment in battery-electric versions by 2025, and those for surface mining by 2030.

Goodyear has announced the development of a non-pneumatic (airless) tire (NPT) and wheel assembly for an autonomous vehicle set to be used in a city setting. The company has spent that past 3 years working together with Local Motors to test an Olli shuttle—an autonomous transport vehicle—utilizing the NPT at Goodyear's testing facilities as well as other locations. The companies tested several performance targets including load, speed and durability.

In 2019 the companies shifted to on-road testing to gather more real-world data on how the NPT will perform in actual transport applications. According to Goodyear, urban transportation environments are an ideal testing scenario for the NPT due to the lower speed and less variable travel paths encountered.

Goodyear and Local Motors is conducting the in-field research with Jacksonville Transportation Authority (JTA) which will provide data on aspects such as ride comfort, noise and other variables important to applications in public transportation.

“As mobility evolves, we feel that tires can transform the way we move and alternative airless architectures are ideal, particularly in the emerging autonomous transportation environment,” said Michael Rachita, Goodyear’s senior program manager, non-pneumatic tires, in the company's press release announcing the testing of the NPT. “This is an important milestone as we look to advance mobility today and as we look to introduce the first completely sustainable and maintenance-free tires by the end of the decade.”

"Autonomous vehicles, like Olli, need to decrease maintenance costs and perform reliably," said Local Motors President Vikrant Aggarwal. "Goodyear's non-pneumatic tires are positioned to give maintenance teams less to worry about while giving passengers a quiet, consistent ride. Non-pneumatic tires may just be the industry standard in the coming years."

READ MORE: The Impact of Autonomous and Electric Vehicles on Tire Designs