Preliminary Class 8 orders in January reached 21,600 units, which was 20% better than the previous year, and indicates market confidence. 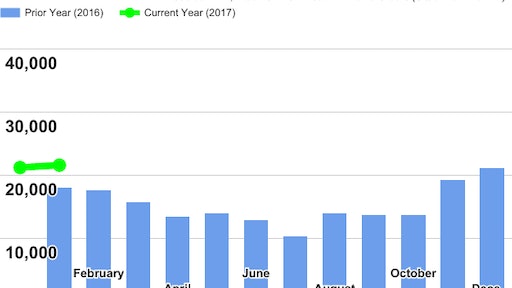 FTR releases preliminary Class 8 net orders for January at a solid 21,600 units, continuing the remarkably consistent trend that began in October. January 2017 Class 8 orders were 20% better than January 2016. After a steady decline in order rates and backlog throughout most of 2016, the market righted itself in Q4. Class 8 orders for the past 3 months now annualize to 248,000 units, with backlogs expected to rise for the third straight month.

Don Ake, Vice President of Commercial Vehicles at FTR, comments, “The order increase will help to boost Q1 build rates and is more good news for the Class 8 market. It is unusual for January orders to be higher than any of the preceding Q4 months. This indicates fleets are more confident in market conditions than they were 4 months ago. OEMs should begin to fill in their production schedules and now February builds look to be much better than previous months.”