Preliminary Class 8 orders in February reached 22,900 units, up 5%, which FTR says exceeded expectations for the second month in a row. 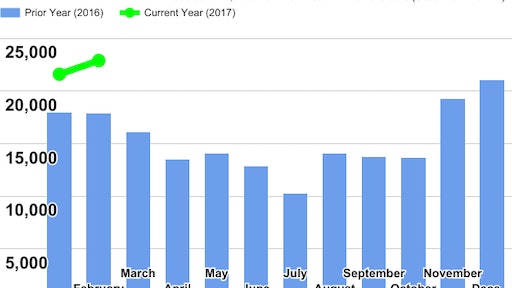 FTR releases preliminary Class 8 net orders for February at 22,900 units, exceeding expectations for the second month in a row with strong year-over-year (y/y) comparisons. February orders were up 5% month-over-month (m/m) and 28% y/y. The steady order trend has now pushed backlogs to over 100,000 units for the first time since June 2016. February’s solid order activity continued the trend that began in November, with market momentum picking up speed at a measured pace. The current order volumes should enable production to hit or exceed Q2 forecasts. Class 8 orders for the past 3 months now annualize to 263,000 units.

Don Ake, Vice President of Commercial Vehicles at FTR, comments, “February was another very encouraging month for Class 8 truck orders. Orders have increased for four straight months, indicating the market is making a solid recovery after the second-half slump in 2016. This order cycle is much flatter and longer than usual, but this is a healthy order total for a February. March orders may not decline that much. This is what a turning point looks like.

“Freight is starting to pick again after sagging some in 2016. Rates are climbing and fleets are feeling much more confident about business going forward. Truck builds and sales should now begin a modest upturn which should continue throughout this year.”