The FTR Trucking Conditions Index remained at a reading of 2.7 in January; the index is expected to rise as the year progresses due to modest growth. 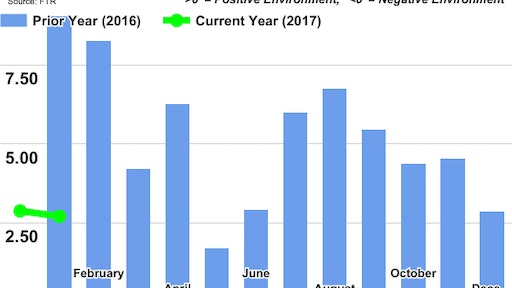 FTR’s Trucking Conditions Index (TCI) for January was basically unchanged from December at a reading of 2.7. As detailed in the March issue of the Trucking Update, FTR expects January will be the low point for trucking conditions ahead of an expected bounce as 2017 progresses. The election results have put the industry in an optimistic mood; however, FTR cautions that there are risks associated with some economic proposals being considered by the new administration and congress.

Jonathan Starks, Chief Operating Officer at FTR, comments, “It’s looking like 2017 will be a better year for the trucking industry. This late recovery is consumer driven, which is relatively light on increasing freight demand, but we will see modest growth. More importantly, the industry is really beginning to face up to the costs and changes from ELD implementation. We expect a productivity and capacity hit to the industry, though the effects will be felt differently, with early adopters ahead of the curve. One of the big issues we expect companies to continue to struggle with is the driver situation, with the number of new hires not keeping pace with overall demand for drivers. If capacity doesn’t meet demand, then truckers will be able to raise prices. However, we don’t expect to see that impact until late 2017, or into 2018.

“We are also closely tracking government policies and actions. The main concern continues to be the possibility of trade wars which could have immediate and detrimental impacts on freight transportation.”