Preliminary Class 8 orders in April increased 4% over March, and are expected to continue on a positive trend as fleets anticipate better freight conditions for the second half of 2017. 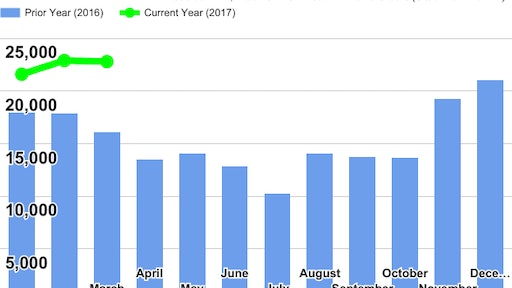 FTR releases preliminary Class 8 net orders for April at 23,600 units, maintaining the steady track that started 7 months ago. While OEM activity was modestly better for some and down marginally for others month-over-month, April orders met expectations with a 4% increase over March and up 77% versus a year ago. Fleets are expecting better freight conditions in the second half of the year and current order activity reflects that. Backlogs should increase in April, getting close to where they were a year ago. Class 8 orders for the past 6 months now annualize to 262,000 units.

Don Ake, Vice President of Commercial Vehicles at FTR, comments, “The order pattern continues to track a sustained, normal pattern. In this order cycle, the fleets did not place all the big orders in October and November. The[y] all didn’t jump into the pool at once. Some fleets did order at that time, but since then, fleets have placed orders in a more measured, steady fashion as they became more confident about 2017. There should be one more month of good orders before the traditional summer break.

“The Class 8 market continues to show some solid momentum as orders remain at good levels and production is starting to rise. This is a typical moderate market recovery. The orders increased first, then production and then the actual sales. Truck sales were weak in Q1, but so was the economy. Freight growth is increasing, and the fleets see this and are responding to this trend. This market continues to track the 2013 upswing with modest growth creating a positive environment for the OEMs."