April's -13.4 reading signifies that there has not been capacity or rate relief for shippers in the current strong freight environment. 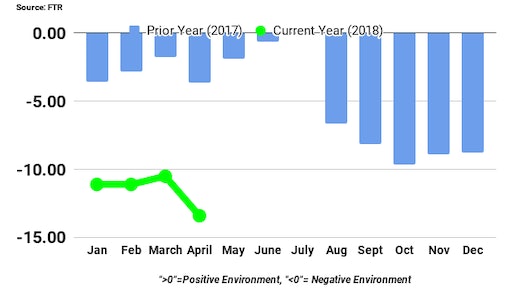 The Shippers Conditions Index (SCI) reading from FTR fell further into double digit negative territory in April at -13.4 signifying that there has not been capacity or rate relief for shippers in the current strong freight environment. April may be the nadir in this cycle as conditions likely will not get significantly worse for shippers over the balance of the year. Overall year-over-year (y/y) rate growth is close to near-term peak. Shippers could see some stabilization in 2019 as more capacity comes on line. However, there is no expectation for lower rates on an absolute basis until at least late 2019. Total shipping costs, with transportation the largest share, are forecast to rise an estimated 12% y/y in 2018 with another 5% increase expected in 2019.

Todd Tranausky, Senior Transportation Analyst at FTR, comments, “Shippers facing significant increases in rates for truck and rail intermodal movements have not yet seen relief. However, record truck orders should begin hitting the market in the second half of the year, and we are closely watching the driver situation, which will determine if shippers see improvements as the trucks become available.”