The FTR Shippers Conditions Index for June improved by nearly three points, achieving a reading of -9.5; however, conditions have not gotten that much better with rates still rising especially in the truckload sector. 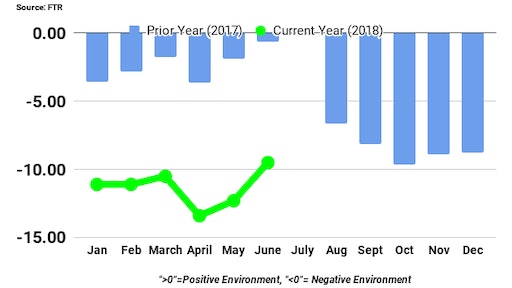 FTR’s Shippers Conditions Index (SCI) for June at -9.5 improved by nearly three points from the previous month indicating the worst may be over for now. However, FTR cautions that conditions have not gotten that much better with rates still rising especially in the truckload sector. Total shipping costs for 2018 should be around 12% higher than 2017, with 2019 forecast to be up another 6%. Overall, there are some signs of stability coming into the market for drivers, capacity, and rates.

Todd Tranausky, Vice President for Rail and Intermodal at FTR, comments, “While conditions have stabilized in the truckload and rail sectors, they remain far from where shippers would like them to be heading into the crucial peak season. Shippers should expect the service they have now to be the service they have through the balance of the year.”