ACEA reports growth was sustained across all commercial vehicle segments and in all key EU markets except Italy. 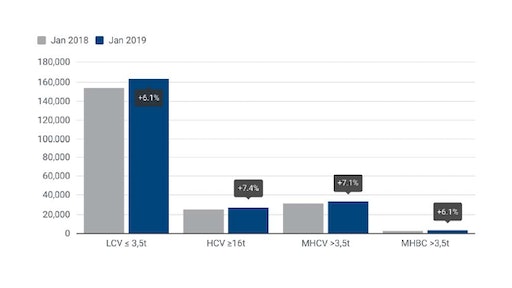 In January 2019, the EU market for commercial vehicles grew by 6.2%. Compared to January last year, total registrations increased from 188,102 to 199,853 units, marking the highest January volume on record.

During the first month of 2019, registrations of light commercial vehicles across the EU increased by 6.1%. Vans made up almost 82% of all commercial vehicles registered last month, thereby making a significant contribution to overall growth. Among the major EU markets, Germany (+13.2%), France (+9.1%), the United Kingdom (+8.6%) and Spain (+7.9%) all performed very well, while demand in Italy (+0.4%) remained similar to January 2018 levels.

In the first month of the year, EU new truck registrations started the year positively, going up by 7.1% compared to one year ago. Looking at the five biggest EU markets, the United Kingdom (+24.9%) and Germany (+23.4%) saw the strongest growth, while demand for trucks fell in Italy (-10.2%).