FTR Reports North American Class 8 Orders for May at 10,400 Units

This is the lowest volume for Class 8 orders since July 2016 and the weakest month of May since 2009. 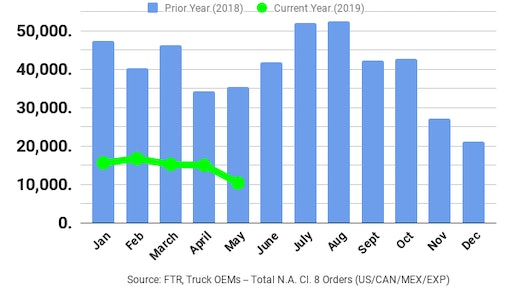 FTR reports preliminary North American Class 8 orders for May scraped the bottom of the order cycle, coming it a lowly 10,400 units, or 29% below the slow April activity. This is the lowest volume for Class 8 orders since July 2016 and the weakest month of May since 2009, reflecting a minus 71% year-over-year (y/y) comparison. Class 8 orders for the past 12 months now total 360,000 units.

May 2019 is basically the final period for ordering trucks to be built in 2019 and the low numbers indicate that fleets are simply trying to find any scarce build slots left for the year. Backlogs should fall to the 220,000 range, just where they were a year ago when the fervent ordering for 2019 began.

Don Ake, FTR Vice President of Commercial Vehicles, comments, “May’s low orders were consistent with it being the last month in this year’s cycle. The 2019 order pattern was pulled ahead by three months, so May’s orders are similar to what you normally would see in August. Ordering for 2020 is expected to begin in June, with several OEMs expected to start taking orders for next year.

“OEM build rates remain at robust levels. The economy and freight growth are expected to ease throughout the year, applying some downward pressure on the truck market in the second half. Orders for the next couple of months should be a good indicator of fleet confidence about 2020.”

Final data for May will be available from FTR later in the month as part of its North American Commercial Truck & Trailer Outlook service.