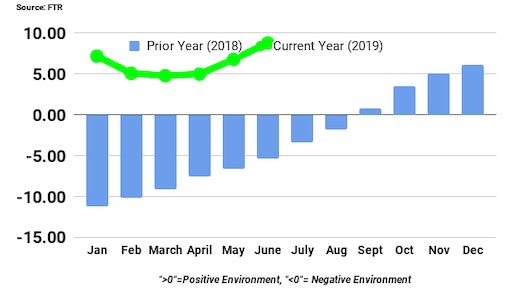 FTR’s Shippers Conditions Index (SCI) rose to a good positive reading in June of 8.8, up two points from the updated May measure. The June SCI reading is the strongest since February 2016.

Freight-related indicators are mixed. Manufacturing is growing very slowly, and construction is weaker. However, consumer spending remains strong. TL rates are about 7.5% below 2019 with spot rates down nearly 18% whereas LTL rates have been higher this year. Both are expected to decline in 2020. Intermodal rates continue to be soft with rail expecting 5% growth in 2019.

Note from FTR: FTR has revised the historical data for the Shippers Conditions Index back to January 2014 based on significant changes resulting from their July 2019 Freight•cast model update.

Todd Tranausky, Vice President of Rail and Intermodal at FTR, comments, “The relatively weak rate environment for truckload allows it to compete more effectively with intermodal. Intermodal volumes have been stymied by trade headwinds, changes in rail service offerings, overall rail service levels, and the weak truck market. International and domestic intermodal each struggled in June with weak results.”

The August issue of FTR’s Shippers Update, published August 7, 2019, details the factors affecting the June Shippers Conditions Index. Also included in the August report is a detailed explanation of the Freight•cast model update.