The truck graphics feature a brightly lit and colorfully adorned Christmas Tree next to the U.S. Capitol below the words “From the Oregon Trail to the Capitol Steps.” 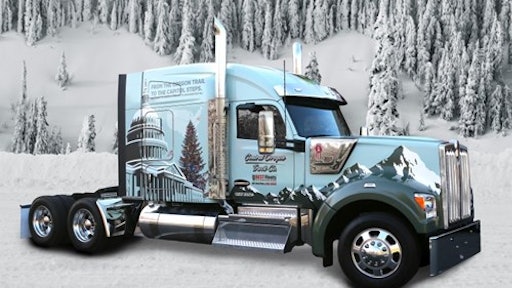 A new Kenworth W990 will transport the 54th U.S. Capitol Christmas Tree from the Nov. 2 tree-cutting in Oregon’s Willamette National Forest to more than 25 community celebrations en route to the tree-lighting ceremony in Washington, D.C., in early December.

To commemorate the 175th anniversary of the Oregon Trail, the Kenworth W990 and the special Tree will follow a reverse path of the trail during the more than 3,000-mile journey. This year’s tour theme is “Find Your Trail” and marks the 50th anniversary of the National Trails Systems Act.

The Kenworth W990, equipped with a 76-in. mid-roof sleeper, offers an eye-catching graphics design with a brightly lit and colorfully adorned Christmas Tree next to the U.S. Capitol below the words “From the Oregon Trail to the Capitol Steps.” The W990 also includes the logo of Redmond, OR-based Central Oregon Truck Company, which is the official hauler of this year’s tree. The company was named the “2018 Best Fleet to Drive For” in the small carrier category by the Truckload Carriers Association and CarriersEdge.

Central Oregon Truck Company was selected due to its excellent reputation in Oregon’s trucking industry, according to Bruce Ward, president of Choose Outdoors, a non-profit organization that assists the U.S. Forest Service in coordinating the annual tour.

“It is an honor to be chosen to deliver the 2018 U.S. Capitol Christmas tree and represent the state of Oregon. We look forward to a memorable trip as we share the Tree with America during the journey to Washington D.C.,” says Rick Williams, CEO of Central Oregon Truck Company. Both Williams, a former flatbed driver; and business partner Phil Taylor, who serves as vice president of maintenance; will drive the W990 as a part of an overall team effort with other driving team members from the company. The flatbed carrier transports freight across the 48 continental states and Canada. The company’s Kenworth trucks are purchased from Papé Kenworth, which is a major sponsor of this year’s tour.

“For the fifth consecutive year, a Kenworth truck will deliver ‘The People’s Tree’. The annual lighting of the U.S. Capitol Christmas Tree is an important American tradition. We’re especially excited that the new Kenworth W990 will transport the Tree. The W990 features the PACCAR Powertrain and will provide a very comfortable work environment for this year’s tour drivers,” says Kurt Swihart, Kenworth Marketing Director.